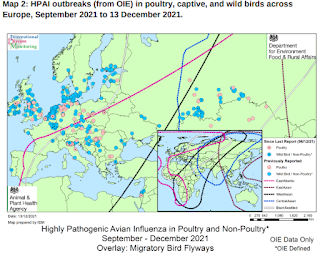 If we weren't about to go into the third year of a coronavirus pandemic - one that continues to throw new variants in our direction and has claimed millions of lives - the record-breaking HPAI H5 avian zoonotic in Europe would be near the top of our worry list.

Considered to be only a threat to wild birds and poultry until a recently as the spring of this year, H5 clade 2.3.4.4b viruses are now known to be capable of infecting humans (see WHO Update), although all known cases have been either mild or asymptomatic.

While none of this puts HPAI H5Nx clade 2.3.4.4b in the same league as the Asian H5N6 virus which has infected nearly 5 dozen people in China, killing roughly half, it is a sign that we need to be paying closer attention to this avian threat.

This past week the ECDC and the EFSA (European Food Safety Authority) released a new 94-page Avian Influenza report that incrementally raised their risk assessment on H5Nx infection for the general public from VERY LOW to LOW, and the risk for occupationally exposed individuals from LOW to LOW to MEDIUM.

While not a huge, headline grabbing increase, this is nevertheless significant, and a far cry from where the risk assessment stood a year ago.  A small snippet from this lengthy and detailed report.

ECDC risk assessment for the general public in the EU/EEA
Avian influenza A(H5N8) viruses have caused large outbreaks in birds and poultry since 2014 [14]. ECDC has published a Threat Assessment Brief on 24 February 2021 (ECDC, 2021b). Over the last year, there have been several thousands of exposure events of people who were involved in e.g. culling activities of infected birds or other related activities, but no documented transmission to humans has been reported in the EU/EEA so far.
The risk assessment is based on the likelihood of infection and disease severity: the likelihood of infection is related to direct unprotected exposure to infected wild birds or poultry (or other mammals infected with avian influenza virus such as foxes and seals) and is considered low for the general population and low to medium for people occupationally exposed to infected birds or other potentially infected mammals. The disease severity has been described as asymptomatic or mild in human cases with A(H5N8) infection in Russia and Nigeria, therefore the impact based on severity has been considered low but with high uncertainty due to the high diversity of circulating avian influenza viruses and the switch from mainly A(H5N8) to A(H5N1) circulating viruses in birds as well as the high severity observed in human cases infected with A(H5N6) in China.
This risk to the general public of human transmission due to avian influenza A(H5N8) is therefore assessed as low and to occupationally exposed people low to moderate. Avian influenza virus transmission to humans is a rare event and the risk is considered very low for viruses adapted to avian species. However, the detection of viruses carrying markers for mammal adaptation, and correlated with increased replication and virulence in mammals, is of concern.

The additional reports of transmission events to mammals, e.g. seals and foxes in several EU countries as well as seroepidemiological evidence of transmission to wild boar and domestic pigs, could indicate evolutionary processes including mammal adaptation with the possibility to acquire the ability to transmit to humans.

However, direct and unprotected exposure to possible infected birds and poultry and their products including blood remains limited to particular mostly occupationally exposed groups of people in the European countries. The uncertainty of this risk assessment is high due to the high variability of the avian influenza viruses of clade 2.3.4.4 with many reassorted subtypes and genetic lineages co-circulating in Europe and globally. Reassortment events will continue and zoonotic transmission of avian influenza viruses cannot be fully excluded in general when avian influenza viruses are present in birds.
People should avoid touching sick or dead birds or their droppings unprotected or wear PPE when in direct contact. Workers should be protected following an updated workplace risk assessment and prevention measures set accordingly7 . Using personal protective measures for people exposed to birds infected with avian influenza viruses will minimise any residual risk. Follow-up measures and testing should be initiated as described above. The risk of travel-related importation of human avian influenza cases from countries where the viruses are detected in poultry or wild birds is very low.

Sporadic human cases infected with A(H9N2) LPAI or A(H5N6) HPAI viruses outside Europe underline the risk of transmission whenever people are exposed to infected birds.

Over the past 8 months we've seen calls from a number of researchers to take the continued evolution of HPAI H5Nx viruses seriously.

Although the zoonotic potential of these European H5Nx viruses remains limited, there is a growing consensus that it continues to increase over time.

And our experience with SARS-CoV-2 has shown that viral threats can escalate quickly, and with very little warning.