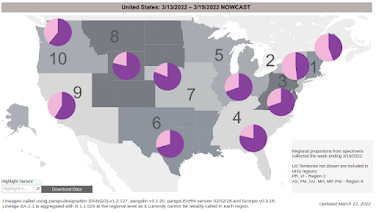 As the above map illustrates, the emerging Omicron BA.2 variant has gained considerable ground in the United States, and as of last Tuesday, the CDC estimated that More Than 50% Of COVID Cases In the Northeast Are Now BA.2.

While BA.2 isn't believed to be any more severe than Omicron BA.1, laboratory testing (link) suggests that BA.2 is no longer susceptible to sotrovimab, which became the `go to' mAb after the FDA pulled the plug on  bamlanivimab and etesevimab (administered together) and REGEN-COV (casirivimab and imdevimab) a month ago.

At the time, sotrovimab was the last remaining monoclonal antibody believed effective against Omicron. Since then Lilly has begun shipping bebtelovimab, which reportedly retains effectiveness against BA.2, but remains in short supply.

There are two oral antivirals (Paxlovid and molnupiravir) still available, but supplies of Paxlovid are limited, while molnupiravir provides significantly less effectiveness (30% vs 88%), and has several use restrictions (including in pregnant women, women who are breastfeeding, pediatric patients, etc.).

This statement updates and replaces the original statement below from 2/25/22.

The U.S. Food and Drug Administration is continually monitoring how authorized and approved treatments for COVID-19 are affected by changing variants—currently Omicron and the Omicron sub-variants, such as BA.2. Today, considering the most recent data available, FDA is announcing that sotrovimab is no longer authorized for use at this time in the following states and territories:

New data included in the health care provider fact sheet shows that the authorized dose of sotrovimab is unlikely to be effective against the BA.2 sub-variant. Based on Centers for Disease Control and Prevention Nowcast data, the BA.2 sub-variant is estimated to account for more than 50% of cases in the states and territories in Regions 1 and 2 listed above as of March 19, 2022.

There are several other therapies – Paxlovid, Veklury (remdesivir), bebtelovimab, and Lagevrio (molnupiravir) – that are expected to be effective against the BA.2 sub-variant, and that are authorized or approved to treat certain patients with mild-to-moderate COVID-19 who are at high risk for progression to severe disease, including hospitalization or death. Health care providers should assess whether these treatments are right for their patients.

We will continue to monitor BA.2 in all U.S. regions and may revise the authorization further to ensure that patients with COVID-19 have effective treatments available. Health care providers should also monitor the frequency of BA.2 in their region as they choose appropriate treatment options for patients.

[2/25/2022] On February 23, 2022, FDA revised the emergency use authorization for sotrovimab to clarify that sotrovimab is not authorized for treatment of mild-to-moderate COVID-19 in geographic regions where infection is likely to have been caused by a variant that is not susceptible to this treatment. However, sotrovimab is currently authorized in all U.S. regions until further notice by FDA. For other limitations and conditions, refer to the emergency use authorization (EUA).

FDA will continue to monitor conditions to determine whether use in a geographic region is consistent with the scope of authorization, referring to available information, including information on variant susceptibility and CDC regional variant frequency data.

This EUA authorizes sotrovimab for the treatment of mild-to-moderate COVID-19 in adults and certain pediatric patients with positive results of direct SARS-CoV-2 viral testing, and who are at high risk for progression to severe COVID-19, including hospitalization or death. Sotrovimab should be administered by a qualified health care provider as a single intravenous infusion (IV) as soon as possible after positive viral test for COVID-19 and within seven days of symptom onset.

It seems likely, given the rapid expansion of BA.2 in the United States, that a month from now much of the country will have joined HHS Regions 1 & 2, in having more than 50% of their cases due to BA.2.

While not exactly bare, our pharmacological cupboard for Omicron has grown increasingly thin, and that is a trend that could potentially accelerate as other variants emerge.

Seven months ago, in UK SAGE: Can We Predict the Limits of SARS-CoV-2 Variants and their Phenotypic Consequences?, we looked at predictions that current vaccines, and therapeutics like monoclonal antibodies, could be rendered less effective if the SARS-COV-2 virus were to drift antigenically away from earlier strains.

3. Antigenic ‘shift’: Natural recombination events that insert a different spike gene sequence (or partial sequence) from human CoVs MERS-CoV (highly unlikely due to the low frequency of MERS-CoV infections), or from currently circulating endemic human CoVs (more likely due to the prevalence of these viruses). This would recombine into the ‘body’ of SARS-CoV-2 that is capable of high replication in human cells. The consequence could be a virus that causes disease at a level similar to COVID-19 when it first emerged but against which our current battery of spike glycoprotein-based vaccines would not work.
Likelihood: Realistic possibility.

Scenario Three: Emergence of a drug resistant variant after anti-viral strategies.
This could be caused by:
6. Emergence of new variants following the administration of directly acting antiviral therapies. As we begin to use directly acting antiviral drugs it is highly likely a variant will be selected that had resistance to individual agents. For example, drugs that target the viral 3C protease, drugs that target the polymerase, monoclonal antibodies that target the spike glycoprotein. If the drugs are used as a mono therapy, then resistant variants have a high probability of emerging. This may render all drugs in that category unusable.

Likelihood: Likely - unless the drugs are used correctly.

It should be noted that vaccines still appear to provide significant protection against severe illness, hospitalization, and death, but their ability to prevent infection has fallen sharply.

Rapid evolution is a virus's best friend, and our worst enemy, during a pandemic.

While it can sometimes attenuate the severity of a virus - as it has with Omicron -  at the same time it has made it more transmissible, and less susceptible to our current vaccines and therapeutics.

Viruses have managed to exist for hundreds of millions of years because they are able to adapt to an ever-changing, and often hostile, environment.

Which is why it would be foolhardy for us to underestimate COVID's next move.

Posted by Michael Coston at 8:26 AM