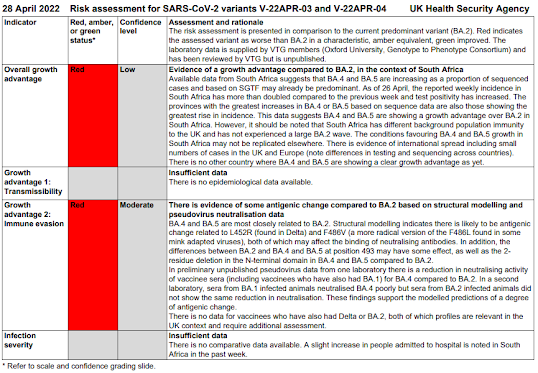 Although the United States is dealing with its own emerging Omicron variant (BA.2.12.1), in South Africa, the UK, and now in Europe the concern is over a pair of new Omicron variants (BA.4 and BA.5) which are showing signs of becoming the next dominant strain.

In early May the UK released their first risk assessment on BA.4 and BA.5, where they noted the progress this variant has made in South Africa against BA.2 over the past few months, and likely antigenic changes due to  `. . .  L452R (found in Delta) and F486V (a more radical version of the F486L found in some mink adapted viruses), both of which may affect the binding of neutralising antibodies'.

So far we've not seen any evidence that BA.4, BA.5, or BA.2.12.1 produce any more serious illness than did BA.1.1 or BA.2. There are concerns, however, that prior infection by Omicron may not provide much protection against reinfection with BA.4 or BA.5, and of limited, and waning protection offered by the vaccine.

Following reports of increasing numbers of BA.5 in Portugal, late this week the ECDC raised the status of BA.4 and BA.5 from VOI (Variants of Interest) to VOC (Variants of concern), in the following epidemiological update.

As of 12 May 2022, ECDC has reclassified Omicron sub-lineages BA.4 and BA.5 from variants of interest to variants of concern.

BA.4 and BA.5 were first detected in South Africa in January and February 2022, respectively, and since then they have become the dominant variants there. Both lineages contain the amino-acid substitutions L452R, F486V, and R493Q in the spike receptor binding domain compared to BA.2. Preliminary studies suggest a significant change in antigenic properties of BA.4 and BA.5 compared to BA.1 and BA.2, especially compared to BA.1. Additionally, there is an increasing trend in the variant proportions for BA.5 observed in Portugal the recent weeks, accompanied by an increase in COVID-19 case numbers and test positivity rate.

The Portuguese National Institute of Health estimated that BA.5 already accounted for ~37% of the positive cases as of 8 May 2022. The estimated daily growth advantage for BA.5 over BA.2 is 13%, which is similar to the 12% daily growth advantage previously reported by South Africa. Assuming such growth rate, BA.5 will become the dominant variant in Portugal by 22 May 2022.

The currently observed growth advantage for BA.4 and BA.5 is likely due to their ability to evade immune protection induced by prior infection and/or vaccination, particularly if this has waned over time. Limited available data from in vitro studies evaluating sera from unvaccinated individuals who have experienced a prior BA.1 infection indicate that both BA.4 and BA.5 are capable of escaping immune protection induced by infection with BA.1. Such unvaccinated individuals are unlikely to be protected against symptomatic infection with BA.4 or BA.5. Whilst sera from vaccinated individuals performed better in in vitro studies done thus far, protection derived from currently available vaccines does wane over time against the Omicron variant.

There is currently no indication of any change in severity for BA.4/BA.5 compared to previous Omicron lineages.

Taken together, this indicates that the presence of these variants could cause a significant overall increase in COVID-19 cases in the EU/EEA in the coming weeks and months. The overall proportion of BA.4 and BA.5 in the EU/EEA is currently low but the high growth advantages reported suggest that these variants will become dominant in the EU/EEA in the coming months. Based on the limited data currently available, no significant increase in infection severity compared to the circulating lineages BA.1 and BA.2 is expected. However, as in previous waves, if COVID-19 case numbers increase substantially, some level of increased hospital and ICU admissions is likely to follow.

ECDC encourages countries to remain vigilant for signals of BA.4 and BA.5 emergence. Early variant detection critically relies on sensitive and representative testing and genomic surveillance, with timely sequence reporting. Representative testing policies are required to reliably estimate the contribution of these variants to ongoing viral circulation, as well as to accurately determine the extent these variants may contribute to any observed increases in severe outcomes in the population, such as increases in hospital or ICU admissions.

The public health benefit of administering a second mRNA COVID-19 booster dose was recently assessed by ECDC to be clearest in those aged 80 years and above and immediate administration of a second booster dose in this population was found to be optimal in situations of continued high or increasing viral circulation.

Continued close epidemiological and vaccine effectiveness monitoring is essential in order to rapidly detect signals of increased SARS-CoV-2 circulation or risk of severe disease among vaccinated individuals. If such signals emerge, a second booster may be considered for some or all adults 60 years and older and for other vulnerable groups. Countries should have plans in place for the rapid deployment of booster doses in these population groups.

For all age groups, it remains a priority to improve COVID-19 vaccine uptake of the primary course and first booster dose in populations who have yet to receive them.

While our focus here in the United States is currently on BA.2.12.1, history has shown (with Alpha, Delta, and Omicron) that what takes off in Europe eventually makes its way to our shores. How much of an impact that would have - and its timing - will depend on how well it can compete against our own Omicron BA.2.12.1 variant.
But with vaccine (and booster) protection expected to wane even further over the summer, and two antigenically distinct Omicron variants in the wings, recent reports suggesting the pandemic is nearly over are likely premature.
Posted by Michael Coston at 6:13 AM