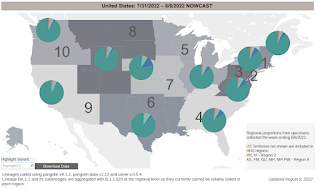 #16,932
BA.5 wrested control from BA.2.12.1 7 weeks ago and has maintained dominance in the United States since then, rising to an estimated 87.1% of cases today.  This represents only a small jump over last week's number (n=85.5%), but nonetheless shows growth.

BA.4.6, which made the CDC's Nowcast report for the first time last week, continues to slowly climb, albeit primarily in the Midwest, where it now makes up roughly 13.2% of cases.

In California, and the Pacific Northwest, it is far less impressive - as it makes up less than 2% of cases - while in New York it is running just over 6%. So far, most of its gains have come at the expense of variants other than BA.5, but we'll continue to monitor its progress. 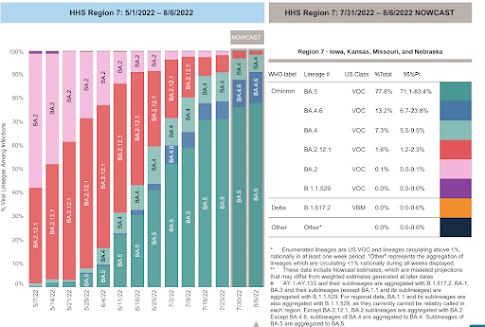 Thus far, BA.2.75 - which is getting a lot of press - hasn't made enough of an impact in the United States to show up on the weekly Nowcast report, but it remains on our radar as a potential successor to BA.5 later in the year.

Otherwise, BA.2.12.1 and BA.2 continue to shrink, and BA.4 has slipped slightly over last week.

While we seem to be in a holding pattern, with BA.5 firmly in control, Omicron has demonstrated its unique ability to swap out variants several times already in 2022, and there is little reason to doubt it won't happen again.