NEJM: A Novel Henipavirus With Human Spillover In China 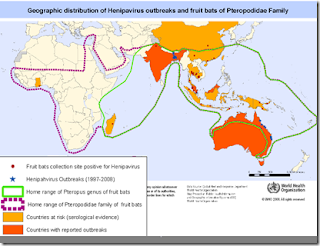 Henipaviruses - of which Nipah and Hendra are the most infamous - belong to the Paramyxoviridae family of viruses, and have sparked a number of deadly spillovers into humans - and epidemics - across South East and Central Asia - and to a lesser extent Australia - over the past 25 years.

Normally carried by Fruit bats, these viruses can carry a high mortality rate in humans, and human-to-human transmission of Nipah has been demonstrated.

The deadlier of the two - Nipah - was only first discovered 25 years ago after an outbreak in Malaysia, which spread from bat to pigs - and then from pigs to humans - eventually infecting at least 265 people, killing 105 (see Lessons from the Nipah virus outbreak in Malaysia).

Since then we've seen sporadic outbreaks - particularly in Bangladesh and India - often with a case fatality rate of between 70% and 90%.  In the 2013 paper The pandemic potential of Nipah virus by Stephen P. Luby, the author wrote (bolding mine):

Characteristics of Nipah virus that increase its risk of becoming a global pandemic include: humans are already susceptible; many strains are capable of limited person-to-person transmission; as an RNA virus, it has an exceptionally high rate of mutation: and that if a human-adapted strain were to infect communities in South Asia, high population densities and global interconnectedness would rapidly spread the infection.

Last year, researchers announced the discovery of a A Novel Variant Of the Hendra Virus in Australia, and it is a fair assumption there are other as yet undiscovered variants in the wild.  And while bats are  presumed to be the primary reservoir host for Henipaviruses, they may not be the only ones.

All of which brings us to a correspondence from researchers from Beijing Institute of Microbiological Epidemiology and a team from the National University of Singapore - published late last week in the New England Journal of Medicine - that describes the discovery of a novel zoonotic henipavirus in China's eastern Shandong and Henan provinces.

A Zoonotic Henipavirus in Febrile Patients in China

Although this report is normally part of the subscriber only content on the NEJM, it is accessible with a free account registration. You'll want to follow the link to read it in its entirety.

Briefly, however, researchers described a phylogenetically distinct henipavirus - dubbed Langya henipavirus (LayV) - which they isolated from the throats of 35 fever patients who reported recent animal exposure.

Genetic testing of 25 animals found low levels of the virus in dogs (5%) and goats (2%), but much higher levels (27%) in shrews, which they suspect may be the reservoir host for this virus.

While the virus was found in 35 patients - all exhibiting a range of symptoms (fever, cough, fatigue, anorexia, leukopenia, and for some - liver or renal damage)  - they haven't fully established a causal relationship between the viral infection and the disease, although it is strongly suspected.

It is far too soon to even speculate how much of a threat - if any -  this virus may pose in the future. But it is sobering when you consider how many of these zoonotic threats there are out there.

Some of the `lesser' novel viruses we've seen emerge over the past decade include:

Nosocomial Outbreak of SFTS Among Healthcare Workers in a Single Hospital in Daegu, Korea

While we tend to concentrate on the `big ticket' threats, like Avian flu, Nipah, Ebola, and MERS-CoV, there are scores of unknown, or lesser known threats that could - like COVID did in 2019 - suddenly come out of left field as our next pandemic contender.

Fifty years ago, it seemed as if we had entered the golden age of medicine, and were on the verge of conquering infectious diseases.

Eradication of smallpox and polio though vaccination seemed not only possible, but imminent.  Childhood diseases like mumps, measles, and whooping cough were now preventable, and modern antibiotics could cure almost any bacterial infection.

Instead of a `golden age', we've entered an age of emerging and reemerging pandemic threats (see PNAS Research: Intensity and Frequency of Extreme Novel Epidemics), one where an obscure virus from a far off land can spark a global crisis with little or no warning.

The Langya henipavirus (LayV) currently ranks pretty far down our threat list, and may never amount to anything more than a local concern and a scientific curiosity.

But Nature's laboratory is open 24/7, and it always has an abundance of experiments underway.

Posted by Michael Coston at 9:56 AM