# 17,136
Although we tend to focus on evolutionary changes in novel viruses - like SARS-CoV-2 and avian and swine variant flu - seasonal influenza viruses mutate and evolve as well, primarily through a process called antigenic drift (see NIAID video below). 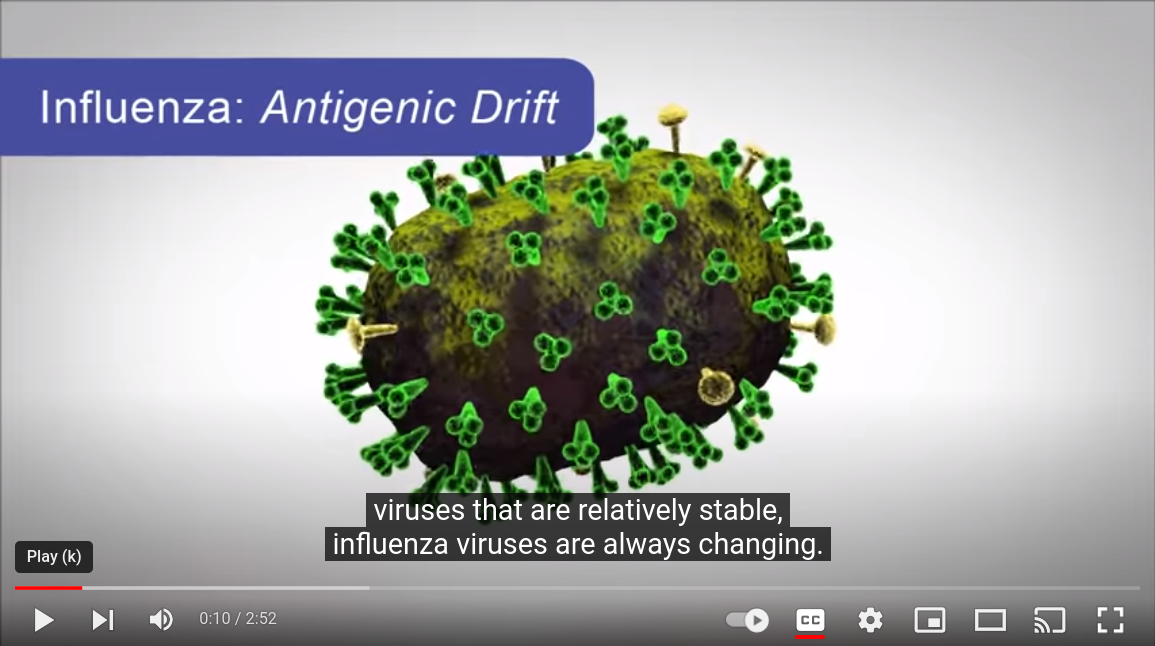 While antigenic drift is slower than antigenic shift (aka reassortment), it occurs more or less constantly, and can - over time - alter the way a flu virus behaves.  As a result, we don't just have one H1N1 or H3N2 seasonal virus in circulation, but an array of diverse variants all jostling for dominance.
The H3N2 virus, which emerged as a pandemic strain in 1968 (supplanting 1957's pandemic H2N2), settled in the following year as a seasonal flu strain and remained the sole human influenza A strain until 1977, when H1N1 mysteriously reappeared after a 20 year absence.

Since then, H3N2 has co-circulated with (first) the old H1N1 strain (until 2009) and then the new H1N1pdm09 strain. Unlike in previous pandemics, the 2009 H1N1 virus did not supplant the existing (in this case, H3N2) influenza A virus.

All of which makes H3N2 a bit long in the tooth, having been circulating in humans now for more than 50 years. Over the past five decades it has had to reinvent itself innumerable times (via antigenic drift) to evade acquired immunity, resulting in an increasing number of subclades of the virus co-circulating around the globe.

As we've discussed often (see The Enigmatic, Problematic H3N2 Influenza Virus) this increased diversity can make it harder to create effective vaccines against H3N2 compared to H1N1 and influenza B.

While influenza activity was subdued during the first 18 months of the COVID pandemic, it made a return last year, and leading the charge was a new H3N2 clade 3C.2a1b.2a.2 (aka Bangladesh-like) virus, which was antigenically different from the recommended Northern Hemisphere's vaccine strain (3C.2a1b.2a.1 clade).

For an influenza virus to infect a human, it must bind to the α2,6 receptor cells that line the human respiratory tract.  Avian flu viruses bind preferentially to α2,3 receptor cells which are found in the gastrointestinal tract of birds, which makes it harder for them to jump to humans.

While human H3N2 flu viruses already bind well to α2,6 receptor cells, we've a report today out of Russia that suggests that this newly emergent H3N2 clade may have evolved to bind even more tightly to these types of receptor cells.

In theory, that could increase the virus's ability to infect human hosts, and these researchers suggest it may even allow H3N2 to better compete against both the SARS-CoV-2 virus and COVID mitigation efforts.

Whether these findings translate into tangible real-world impacts remains to be seen, but it is something for us to watch for as this year's flu season progresses.

I've only posted the abstract, and some excerpts, from a much longer report. Follow the link to read it in its entirety.

Re-Emergence of Circulation of Seasonal Influenza during COVID-19 Pandemic in Russia and Receptor Specificity of New and Dominant Clade 3C.2a1b.2a.2 A(H3N2) Viruses in 2021–2022


The circulation of seasonal influenza in 2020–2021 around the world was drastically reduced after the start of the COVID-19 pandemic and the implementation of mitigation strategies. The influenza virus circulation reemerged in 2021–2022 with the global spread of the new genetic clade 3С.2a1b.2a.2 of A(H3N2) viruses. The purpose of this study was to characterize influenza viruses in the 2021–2022 season in Russia and to analyze the receptor specificity properties of the 3С.2a1b.2a.2 A(H3N2) viruses.

Clinical influenza samples were collected at the local Sanitary-and-Epidemiological Centers of Rospotrebnadzor. Whole genome sequencing was performed using NGS. The receptor specificity of hemagglutinin was evaluated using molecular modeling and bio-layer interferometry. Clinical samples from 854 cases of influenza A and B were studied; A(H3N2) viruses were in the majority of the samples. All genetically studied A(H3N2) viruses belonged to the new genetic clade 3C.2a1b.2a.2.
Molecular modeling analysis suggested a higher affinity of hemagglutinin of 3C.2a1b.2a.2. A(H3N2) viruses to the α2,6 human receptor. In vitro analysis using a trisaccharide 6'-Sialyl-N-acetyllactosamine receptor analog did not resolve the differences in the receptor specificity of 3C.2a1b.2a.2 clade viruses from viruses belonging to the 3C.2a1b.2a.1 clade. Further investigation of the A(H3N2) viruses is required for the evaluation of their possible adaptive advantages. Constant monitoring and characterization of influenza are critical for epidemiological analysis.

Previous studies indicate the occurrence of substantial changes in binding specificity and affinity in modern human H3N2 viruses. In particular, it was suggested that since 1968, the avidity of the A(H3N2) HA to human receptors has declined and may have re-sulted in the decreased epidemiological impact of A(H3N2) viruses [13].
The wide distribution of the A(H3N2) group 2a2 viruses in the world and their complete dominance in Russia in 2021–2022 demonstrated the ability of these viruses to spread successfully regardless of the SARS-CoV-2 co-circulation and pandemic mitigation measures. There could be multiple epidemiological, virological, and immunological reasons for this phenomenon, one of which could be associated with transmissibility. There are amino acid substitutions Y159N, T160I, and D190N in the HA of A(H3N2) group 2a2 viruses, which can potentially change receptor-binding properties based on previous studies [Flusurver] and as a result may affect transmissibility [12].
(SNIP)

The re-emergence of influenza circulation occurred in Russia in the 2021–2022 season in association with the lessening of anti-COVID-19 measures and the reduced immunity of the population to the influenza virus and an increase in population immunity to SARS-CoV-2.

Clade 3C.2a1b.2a.2 A(H3N2) viruses dominated in Russia and the world in the 2021–2022 season and may be more adapted to transmission in the conditions of anti-COVID-19 measures and co-circulation with SARS-CoV-2. Molecular modeling predicted a higher affinity of the viruses to human upper respiratory tract receptors. Further investigation of the viruses is required for the evaluation of their possible adaptive advantages.

Due to ongoing uncertainty surrounding the COVID-19 pandemic and its impact on influenza activity, it is critical to maintain ongoing global influenza surveillance and recommend influenza vaccination

We know that seasonal flu can vary wildly in intensity, and severity, from one year to the next.

There is even historical precedent for seeing an unusually deadly wave of influenza emerge during an otherwise mild non-pandemic year (see Remembering 1951: The Year Seasonal Flu Went Rogue).

The only thing really predictable about influenza, is its ability to surprise us.

Posted by Michael Coston at 8:42 AM