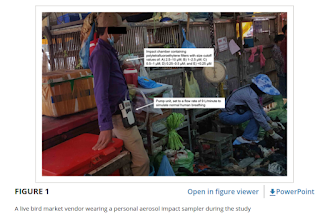 Live bird markets (LBMs) have long been linked to human exposure to (and infection by) avian influenza viruses, so much so that in 2014, in CDC: Risk Factors Involved With H7N9 Infection, we looked at a case-control study that pretty much nailed visiting LBMs as the prime risk factor for infection.

Since then we've seen cases whose likely exposures were cited as simply living near, or walking past an LBM (see J. Infection: Aerosolized H5N6 At A Chinese LBM (Live Bird Market)).

These markets also present another danger, as birds of many varieties (chickens, ducks, geese, doves, etc.) - often raised on different farms - are brought together and housed in close proximity,  providing an ideal environment for the spreading of avian viruses (and potential reassortment events). While China and other governments have attempted to shut down these markets (see Beijing Orders Closure Of Live Bird Markets To Control H7N9), they are so deeply ingrained in many cultures that illegal markets quickly spring up in their place.

Legal markets can be inspected and regulated, which is why LBMs are still tolerated and most bans have been short-lived.

Over the years we've seen attempts to measure the risk of exposure to avian viruses at these markets (see Detection Of Airborne H9 Nucleic Acid In Chinese Live Poultry Market), where thousands of birds are housed togehter, slaughtered, and sometimes mechanically defeathered for the customer (see How to Aerosolize A Chicken).

Most involved swabbing surfaces, or collecting air samples, and testing for H5, H7, or H9 viral RNA. This detection of viral RNA is a much lower bar than isolating a live virus, and doesn't tell us about the viability of the viruses they detected.

All of which brings us to a new study, published yesterday in Zoonoses and Public Health, that documents high levels of H5 & H9 viruses in the air at a Cambodian LBM during the `high season' for avian flu, and more importantly, that a large percentage remained viable (and infectious).

Senior authors Philippe Dussart and Erik A Karlsson contributed equally to this article.

Live bird markets (LBMs) have been identified as key factors in the spread, persistence and evolution of avian influenza viruses (AIVs). In addition, these settings have been associated with human infections with AIVs of pandemic concern. Exposure to aerosolised AIVs by workers in a Cambodian LBM was assessed using aerosol impact samplers.
LBM vendors were asked to wear an air sampler for 30 min per day for 1 week while continuing their usual activities in the LBM during a period of high AIV circulation (February) and a period of low circulation (May).
During the period of high circulation, AIV RNA was detected from 100% of the air samplers using molecular methods and viable AIV (A/H5N1 and/or A/H9N2) was isolated from 50% of air samplers following inoculation into embryonated chicken eggs. In contrast, AIV was not detected by molecular methods or successfully isolated during the period of low circulation.
This study demonstrates the increased risk of aerosol exposure of LBM workers to AIVs during periods of high circulation and highlights the need for interventions during these high-risk periods. Novel approaches, such as environmental sampling, should be further explored at key high-risk interfaces as a potentially cost-effective alternative for monitoring pandemic threats.

Live bird markets have been identified as key locations for zoonotic infections with AIVs such as A/H5N1 and A/H7N9 (Cowling et al., 2013). In these environments, viruses may be aerosolised by a number of means including defeathering poultry (manual or mechanized) or suspended in dust from faeces or feather follicles. A range of influenza viruses have previously been detected through aerosol collection from LBMs in Asia, including A/H7N9, A/H9N2 and A/H5N6 (Bui et al., 2019; Wang et al., 2020; Wu et al., 2017, 2018; Zeng et al., 2017; Zhou et al., 2016). The high rate of detection during the peak period of circulation is very concerning for the risk of infection in susceptible individuals.

Avian influenza virus detection in poultry and wash water correlated with previous studies, with considerably higher rates of AIV positivity in February compared with May. This study demonstrates the increased risk of aerosol exposure of LBM workers to viable AIVs during periods of high circulation, and highlights the need for more research and risk-reduction interventions during these high-risk periods. Novel methods for monitoring pathogen circulation in high-risk interfaces, such as environmental sampling, need to be further explored to identify improved approaches to surveil for pandemic threats.

Environmental sampling presents an attractive alternative (or complement) to traditional sampling of individual animals. The collection of environmental samples is non-invasive, non-intrusive and is well accepted by market vendors. These approaches have the potential to provide longitudinal monitoring of live animal markets and are conducive to automation, potentially with the use of metagenomic analysis for unbiased monitoring of emerging pathogens. Further studies are needed to determine the optimal sampling frames to ensure high sensitivity and low cost.

Conventional wisdom has long held that influenza viruses can only travel a short distance (1-2 meters) in the air, are quickly deactivated by desiccation and/or UV rays from the sun, and that they aren't truly `airborne'.

The science of all of this has a name; aerobiology – the study of how bacteria, fungal spores, pollen and even viruses can be passively transported in the air. And while some might consider it `fringe' science, we've seen a number of serious studies over they years.

More recently, in 2020's study Nature Comms: Influenza A Transmission Via `Aerosolized Fomites', we looked at laboratory evidence that influenza A viruses (and probably others) can be transmitted via airborne or `aerosolized fomites'.

What the practical infectious range of these aerosolized fomites is still unknown, we continue to see evidence that - under the right conditions - influenza viruses can be incredibly hardy (see Proc. Royal Society B: Influenza A Viruses Remain Viable For Months In Northern Wetlands - USGS).

Twelve years ago, in a blog called Of Ducks, And Feathers, And H5N1 we looked at a study that determined that the H5N1 virus may persist on the dropped feathers from infected ducks for weeks and even months, and that they may help spread the virus in the environment.

While all of these studies have dealt with avian flu viruses, we've seen similar studies involving the airborne spread other animal diseases, including:

Similarly, FMD (Foot & Mouth Disease) has been shown to spread from farm-to-farm over long distances, sometimes exceeding 60 km (see 2022's Airborne Transmission of Foot-and-Mouth Disease Virus: A Review of Past and Present Perspectives).

And while anecdotal, a year ago, in EID Journal: Reassortant Influenza A(H1N1)pdm09 Virus in Elderly Woman, Denmark, January 2021, we looked Denmark's 1st confirmed swine variant infection of a human.

This report was notable because the patient (who had multiple comorbidities) was in a pandemic lockdown at the time of her infection, had very little outside contact, and was one of only 46 confirmed flu cases in Denmark during the 2020-2021 flu season.

Exactly how she came to be infected with a novel swine variant virus under those conditions isn't clear, but the authors did dangle a tantalizing possibility; she lived roughly 2 km from a pig farm, and her ". . . residence was downwind of the pig herd most days preceding clinical symptoms."

Long time readers will recall that back in January of 2008 I wrote a blog called The Virus My Friend, Is Blowin' In The Wind where I cast a dubious eye upon claims by the Indian Government that the bird flu virus (H5N1) was being blown by the wind across the border from neighboring Bangladesh, and was infecting hapless Indian Poultry.

I have to admit, after fourteen years of blogging new scientific evidence, it isn't quite as implausible as it once seemed.