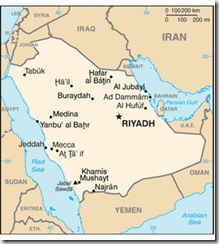 Prior to the emergence of SARS-CoV-2 in late 2019, the coronavirus voted most likely to succeed was MERS-CoV, which is endemic in camels on the Arabian Peninsula, and has spilled over into humans more than twenty-five hundred times (that we know of).

While not nearly as transmissible as SARS-CoV-2, MERS-CoV appears to be much deadlier than COVID with a roughly 35% fatality rate, at least based on the known cases and deaths.

Since the pandemic began, reporting of MERS-Cases by Middle Eastern nations has plummeted (see WHO Chart below).   Whether this reflects reality is up for debate.  In today's report the WHO's overall risk assessment remains unchanged. 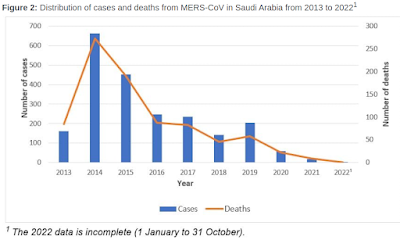 Even before the COVID pandemic, we'd seen estimates that the vast majority of MERS cases go undiagnosed (or unreported) in the Middle East (see EID Journal: Estimation of Severe MERS Cases in the Middle East, 2012–2016)

Although roughly 90% of MERS cases have been reported from Saudi Arabia, the United Arab Emirates, Qatar, Jordan, Oman and Kuwait (combined) have reported more than 160 cases. As with Saudi Arabia, these are expected to be serious under counts.

Admittedly, detecting MERS cases isn't always easy. Over the past decade we've looked at many of the challenges of MERS-CoV surveillance, including:

KSA has never been enthusiastic about public reporting of cases, and we've seen the Saudis take `breaks' in reporting - sometimes lasting for months - several times in the past (see 2018's The Saudi MOH Breaks Their Silence On MERS-CoV).

But even during those `gaps', the World Health Organization managed to continue to publish monthly updates.

Those days are apparently over, as the Saudi MOH stopped maintaining their MERS-CoV landing page nearly a year ago, and last April the WHO posted the first of what they called `the bi-annual update on Middle East Respiratory Syndrome Coronavirus'.

Overnight the WHO published their 2nd `bi-annual update' on MERS-CoV in Saudi Arabia, and based on information provided by the Saudis, only 4 cases have been reported since December 2021.  Follow the link to read the report in its entirety.

Outbreak at a glance

From 29 December 2021 to 31 October 2022, four laboratory-confirmed cases of Middle East respiratory syndrome coronavirus (MERS-CoV) were reported to WHO by the Ministry of Health of the Kingdom of Saudi Arabia. No deaths were reported. Household contacts for the four cases were followed-up by the Ministry of Health, and no secondary cases were identified. The notification of these cases reiterates the need for global awareness of MERS-CoV but does not change the overall risk assessment.

Description of the cases

Since the last Disease Outbreaks News on MERS-CoV in Saudi Arabia published on 7 April 2022, the IHR National Focal Point of the Kingdom of Saudi Arabia has reported four additional cases, with no associated deaths. 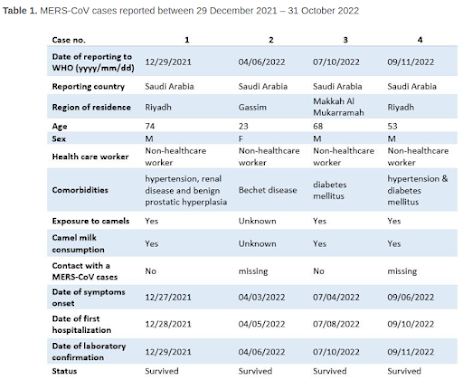 Between September 2012 and 17 October 2022, the total number of laboratory-confirmed MERS-CoV infection cases reported globally to WHO is 2600 with 935 associated deaths. Most of these cases have occurred in countries in the Arabian Peninsula. There has been one large outbreak outside of the Middle East in May 2015, during which 186 laboratory-confirmed cases (185 in the Republic of Korea and 1 in China) and 38 deaths were reported, however, the index case in that outbreak had a travel history to the Middle East. The global number reflects the total number of laboratory-confirmed cases reported to WHO under IHR (2005) to date. The total number of deaths includes the deaths that WHO is aware of to date through follow-up with affected Member States.

The notification of the four cases does not change the overall risk assessment. WHO expects that additional cases of MERS-CoV infection will be reported from the Middle East and/or other countries where MERS-CoV is circulating in dromedaries, and that cases will continue to be exported to other countries by individuals who were exposed to the virus through contact with dromedaries or their products (for example, consumption of camel’s raw milk), or in a healthcare setting. WHO continues to monitor the epidemiological situation and conducts risk assessments based on the latest available information.

The number of MERS-CoV cases reported to WHO has substantially declined since the beginning of the ongoing COVID-19 pandemic. This is likely the result of epidemiological surveillance activities for COVID-19 being prioritized, resulting in reduced testing and detection of MERS-CoV cases. In addition, measures taken during the COVID-19 pandemic to reduce SARS-CoV-2 transmission (e.g. mask-wearing, hand hygiene, physical distancing, improving the ventilation of indoor spaces, respiratory etiquette, stay-at-home orders, reduced mobility) are also likely reduce opportunities for onward human-to-human transmission of MERS-CoV. However, the circulation of MERS-CoV in dromedary camels is not likely to have been impacted by these measures. Therefore, while the number of reported secondary cases of MERS has been reduced, the risk of zoonotic transmission remains.

While MERS-CoV hasn't embarked on a world tour the way that SARS-CoV-2 has, we've seen studies (see A Pandemic Risk Assessment Of MERS-CoV In Saudi Arabia) suggesting the virus doesn't have all that far to evolve before it could pose a genuine global threat.

All reasons why we need to be doing a much better job looking for cases, and reporting them promptly.  Otherwise, we risk being blindsided by the next global health threat.
Again.
Posted by Michael Coston at 8:36 AM