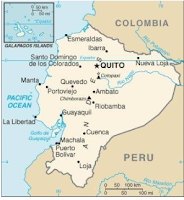 #17,143
We've been following the first known incursion of HPAI H5 into South America for a little over a month, with the initial reports coming from Colombia in late October, but with most of the activity being reported among wild birds from Peru over the past two weeks.

Yesterday, we also learned that neighboring Ecuador had reported HPAI at a commercial poultry farm, killing 50,000 birds, and Peru announced their first outbreak in a backyard flock.

Since then both Peru and Ecuador's Ministry of Agriculture have declared 90-day animal health emergencies.  First stop, Ecuador's MOA, which also announces the culling of 180,000 birds due to avian flu.

Quito, November 30, 2022.- The Ministry of Agriculture and Livestock (MAG), as the national agricultural authority, declared a state of animal health emergency in Ecuadorian territory after the highly pathogenic avian influenza virus was detected. The emergency will last 90 days.

The head of the MAG, Bernardo Manzano, signed Ministerial Agreement No. 134 on November 29. Through this, sanitary measures are implemented for the control and eradication of the disease in the intervention areas that the Phytosanitary and Zoosanitary Regulation and Control Agency (Agrocalidad) determines. In addition, it establishes an internal quarantine of the affected, identified and determined livestock farms.

During the following 90 days, it will not be possible to mobilize birds, products and by-products of avian origin such as eggs, hens, chickens, among others, from the farms affected by the outbreak.

Manzano reiterated that all the control protocols in the National Avian Influence Contingency Plan were activated. "In the focus of contagion we have implemented three blocks of control barriers: 30 technicians will be attending those points 7 days a week, 24 hours a day." This includes bird and poultry control posts on major transit routes. Also the disinfection of vehicles in control areas.

According to the Minister, as part of the security protocol, the birds that are in the detected focus will be sacrificed; there are approximately 180 thousand birds. In the country there are 263 million chickens and 16 million laying birds.

The MAG and Agrocalidad have 850 technicians throughout the country as a contingent to carry out surveillance, monitoring and sampling in other poultry farms with the aim of ruling out the presence of influenza in other provinces.

And this announcement from Peru:

- The mobilization of birds from risk areas, fairs and gallistic events and other concentrations of birds are prohibited

The National Agrarian Health Service (SENASA), an organization attached to MIDAGRI, declared a health emergency for a period of 90 calendar days in the national territory due to the presence of highly pathogenic avian influenza in domestic birds (birds of backyard), and whose period could be extended according to the epidemiological evaluation.

It was also decided to intensify avian influenza surveillance and control actions at the national level, prioritizing the detection area with the purpose of eliminating the focus and preventing its spread to other geographical areas of the country, for which serious sanitary measures will be adopted. .

In this sense, as of the date the measures contemplate the prohibition to any legal or natural person, to mobilize live domestic birds and risk products from the areas considered as focus, perifocus and surveillance of highly pathogenic avian influenza, without the authorization from SENASA.

Likewise, the transfer of live domestic birds and their risk products, within the national territory, without the sanitary certificate issued by SENASA, is prohibited, as is the entry of birds to farms positive for highly pathogenic avian influenza and visiting poultry farms when SENASA has ordered a sanitary measure.

In addition, dead birds may not be thrown into irrigation, drainage or river canals, fairs, exhibitions, gallistic events and other concentrations of birds in the national territory, and handling, without personal protection equipment, birds with symptoms or suspicion of highly pathogenic avian influenza.

In the same way, any natural or legal person must install foot baths in poultry farms with a solution based on quaternary ammonium or glutaraldehyde, in the places of entry and exit and disinfect all equipment, tools, materials, clothing, footwear, vehicles, among others. .

Comply with the quarantine established by SENASA in the properties affected with highly pathogenic avian influenza, with the purpose of preventing the entry and exit of live domestic birds and risk products, persons and unauthorized vehicles, or others.

Authorization must be obtained to enter properties positive for highly pathogenic avian influenza, and use personal protective equipment. When leaving the premises, they must leave this equipment in a warehouse containing quaternary ammonium or glutaraldehyde.

Install signs with the following text in the entrance areas to properties positive for highly pathogenic avian influenza: "Entry is prohibited due to Quarantine Control measures."

The slaughter and elimination of all domestic birds found in the focus where highly pathogenic avian influenza and risk materials (products, bedding, feathers, manure, etc.) have been detected should be coordinated with SENASA personnel. and its burial at a depth of two (2) meters at least. Clean and disinfect the facilities, equipment and utensils, as well as the tools used for the burial.

It is indicated that before carrying out the repopulation of the farms, carry out a sentinelization with birds free of highly pathogenic avian influenza, which must be serologically monitored at fifteen (15), thirty and forty-five (45) calendar days, all the results must be negative for this disease.

Biosecurity and surveillance measures must be strengthened on farms or places where their domestic birds are located, and any sign of disease in birds or decrease in poultry production should be reported to SENASA.

SENASA warns that non-compliance with these sanitary measures will lead to the confiscation and destruction of domestic birds and their products, as well as the adoption of immediate preventive administrative measures, as appropriate.
The SENASA Executive Directorates, in coordination with the Animal Health Directorate, will continue the epidemiological monitoring of highly pathogenic avian influenza. The owners or occupants of properties with the presence of highly pathogenic avian influenza must comply with the sanitary and/or administrative measures established by SENASA.

Given this health context, SENASA urges backyard bird breeders, fighting cocks, and poultry producers to strengthen their biosecurity measures and work jointly with SENASA to address any suspicion of the disease, immediately notifying the death of domestic birds to the cell phone: 946 922 469 or email: reporta.peru@senasa.gob.pe

The history of HPAI H5 has been punctuated by multiple evolutionary events called reassortments - aka Antigenic Shift - where the virus acquires genetic sequences from other (usually low path) avian flu viruses it encounters, which can abruptly alter its pathogenicity, transmissibility, and host range. 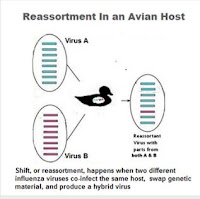 The original H5N1 virus wasn't well suited for carriage by migratory birds (it quickly killed its hosts), and so for years the virus remained limited to Southeast Asia.  A reassortment event at Qinghai Lake, Tibet in 2005 produced clade 2.2 which heralded the first major expansion of H5N1 beyond Southeast Asia to Europe, the Middle East and Africa.

Additional reassortments in 2009, 2013, 2016, 2020, and as recently as this year (see Preprint: Rapid Evolution of A(H5N1) Influenza Viruses After Intercontinental Spread to North America) have all contributed to the increased spread, and durability, of HPAI H5 around the world.

While the future evolution of HPAI H5 is unknowable, the H5 virus now suddenly has access to a fresh array of hosts (and avian viruses) as it spreads across the South American continent.

A genuine concern because - while reassortment events don't happen all that often often - as any virologist will tell you:

Posted by Michael Coston at 7:57 AM