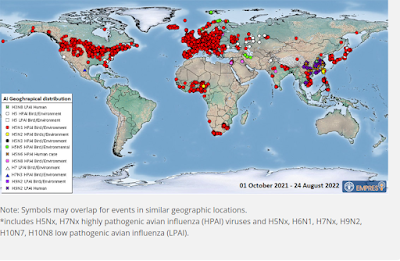 A little over a month ago, in Belize Agricultural Health Authority Reports H5 Avian Flu In Commercial Poultry, and again last week in Iceland as Stepping Stone for Spread HPAI, we discussed the notable lack of Avian flu reports coming out of Central and South America, despite the north-south migratory flyways that traverse the region.

Some of this is likely due to a lack of surveillance and reporting, but it took many years - until 2017 - for HPAI H5 to work its way down the African continent and to become endemic in South Africa.

While most migratory birds travel from low to high latitudes in their (northern or southern) hemisphere, relatively few, it seems, are trans-equatorial travelers.

South and Central America have not been completely devoid of avian flu (see PLoS One Avian influenza in Latin America: A systematic review of serological and molecular studies from 2000-2015), and Belize reported multiple outbreaks of LPAI H5N2 in 2015, but these have been rare detections.

While just barely inside South America, this week WOAH (World Organization for Animal Health) reported the first detection of HPAI H5N1 in Colombia, discovered in two separate outbreaks near their border with Panama. 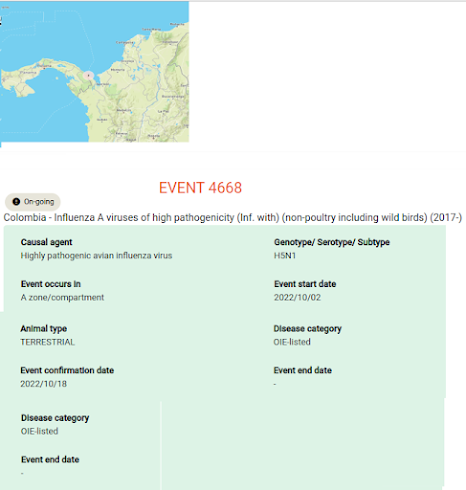 Three weeks ago, in FAO Update: Global Avian Influenza Viruses with Zoonotic Potential, we looked at the unprecedented spread of avian flu over the 2021-2022 season.

Already we are seeing new records being set in Europe (see UK DEFRA: Avian Influenza: Prevention Zone Declared Across Great Britain), a strong resurgence in the United States, and now this incursion into South America.

While HPAI H5Nx remains primarily a threat to wild birds and poultry, it continues to evolve in unpredictable ways (see Spain: Avian H5N1 Spillover Into Farmed Mink), making it a threat very much worthy of our attention.

Posted by Michael Coston at 1:10 PM