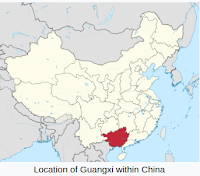 Although it can be confusing, there are many different clades (varieties) of avian H5N1 viruses in the wild, some of which are more pathogenic to humans than others. The clade 2.3.4.4b H5N1 virus which is currently affecting poultry and wild birds - and the occasional human - in Europe and North America is not the same as its deadlier Asian cousins.

While they share a common ancestor, the European H5N1 virus has (thus far) only produced mild or asymptomatic infections in humans, while some Asian H5 clades have a double-digit fatality rate.

With that in mind we have a (belated) report out of Mainland China of a fatal infection with H5N1 in a 38-year-old woman from Guangxi Province.  She fell ill and was hospitalized in September, and died in October.  While the clade isn't given, based on its severity, this is almost certainly one of the Asian strains.

China, which is dealing with a variety of internal problems (see China At The Pandemic Crossroads) is often slow to report avian flu cases - or any other `bad news' for that matter - which is why `no news' doesn't always mean `good news' when it comes to Mainland China.

Today's report from Hong Kong's CHP follows.  I'll have a bit more after the break.

The Centre for Health Protection (CHP) of the Department of Health is today (November 30) closely monitoring a human case of avian influenza A(H5N1) in the Mainland, and again urged the public to maintain strict personal, food and environmental hygiene both locally and during travel.

The case involves a 38-year-old woman living in Qinzhou, Guangxi, who had exposure to live domestic poultry before onset. She developed symptoms on September 22 and was admitted for treatment on September 25. She passed away on October 18.

From 2005 to date, 54 human cases of avian influenza A(H5N1) have been reported by Mainland health authorities.

"All novel influenza A infections, including H5N1, are notifiable infectious diseases in Hong Kong," a spokesman for the CHP said.

Travellers to the Mainland or other affected areas must avoid visiting wet markets, live poultry markets or farms. They should be alert to the presence of backyard poultry when visiting relatives and friends. They should also avoid purchasing live or freshly slaughtered poultry, and avoid touching poultry/birds or their droppings. They should strictly observe personal and hand hygiene when visiting any place with live poultry.

Travellers returning from affected areas should consult a doctor promptly if symptoms develop, and inform the doctor of their travel history for prompt diagnosis and treatment of potential diseases. It is essential to tell the doctor if they have seen any live poultry during travel, which may imply possible exposure to contaminated environments. This will enable the doctor to assess the possibility of avian influenza and arrange necessary investigations and appropriate treatment in a timely manner.

While local surveillance, prevention and control measures are in place, the CHP will remain vigilant and work closely with the World Health Organization and relevant health authorities to monitor the latest developments.

The public should maintain strict personal, hand, food and environmental hygiene and take heed of the advice below when handling poultry:
The public may visit the CHP's pages for more information: the avian influenza page, the weekly Avian Influenza Report, global statistics and affected areas of avian influenza, the Facebook Page and the YouTube Channel.

Although it is undoubtedly a major undercount, prior to 2021 the World Health Organization had confirmed 862 human infections with the `Asian' H5N1 virus (see chart below). Of those, 455 (52%) died. 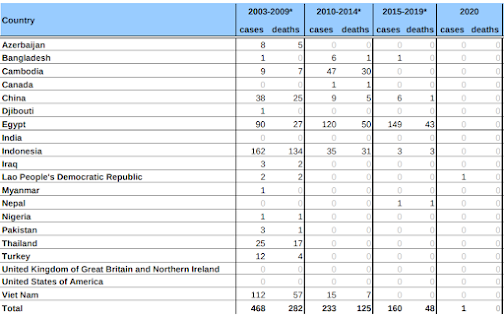 While infections with H5N1 and H5N6 are sporadic, and H7N9 is now (at least temporarily) controlled by China's massive poultry vaccination campaign, the concern is that these viruses can intermingle, and even share genetic material, meaning that a `mild' H5N1 virus today may not remain so forever.

Last month we saw the release of ECDC Guidance For Testing & Identification Of Zoonotic Influenza Infections In Humans In The EU/EAA, while CDC Guidance can be found HERE.

To date, all known human influenza pandemics have involved only H1, H2, and H3 viruses, and there is some debate over whether an H5 virus can actually join that exclusive club.

But the same skepticism existed about novel coronaviruses not so many years ago, and we now know how well that turned out.

Posted by Michael Coston at 6:25 AM