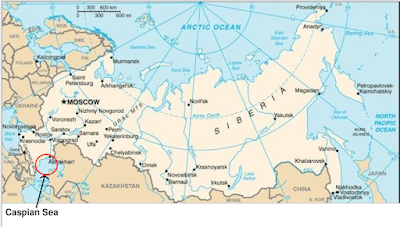 In early December of 2022 there were reports in the Russian media of the discovery of a large number (700) of dead seals near on the coast of the the Caspian Sea near Dagestan (see map above).  These reports quoted the Federal Agency for Fishery as saying:

“The carcasses of dead seals in the amount of 650-700 individuals were found in the area from the oil depot to the mouth of the Sulak River,” the ministry said in a statement. They specify that the number of discovered animals may increase. The alleged cause of death has not yet been established. RBC sent a request to the press service of the regional government.

A few days later, another report suggested the number was likely closer to 2500, and discussed the possibility that they had died as the result of oxygen starvation due to gas (methane) emissions due to seismic activity.

A similar event two years earlier in that region had been attributed to that scenario.

Today, a (translated) press release from the Dagestan State University states that an (as yet unsubtyped) avian influenza A virus was detected in the carcasses of these seals.  They state that it is too soon to say whether the virus was the actual cause of death.

While we've seen a number of different influenza A viruses infect seals in the past - including H3N8, H10N8, H7N7, etc. - HPAI H5N1 is the most obvious suspect right now.  Hopefully we'll get confirmation in the days ahead.

First the press release, then I'll return with a postscript.

BIRD FLU FOUND IN DEAD SEALS IN THE CASPIAN SEA

Preliminary studies of the mass mortality of Caspian seals showed that the animals were infected with avian influenza. At the same time, it is too early to conclude that it was the virus that caused the death, research is ongoing, - said Alimurad Gadzhiev, director of the Institute of Ecology and Sustainable Development of DSU.

“Specialists from the Institute of Ecology and Sustainable Development, together with colleagues from the Research Institute of Virology and experts from the Compass Foundation, took tissue samples from dead seals in December to determine the causes of death. Today, based on the first results, we can say that the samples gave positive results for bird flu,” the scientist said.

According to Gadzhiev, in late spring-early summer 2022, on Maly Zhemchuzhny Island (one of the main Caspian seal rookeries in the North Caspian), a mass death of a wild bird from a highly pathogenic avian influenza of the H5N1 strain (safe for humans) was noted.

“We think that this could have happened to the Caspian seal as well, as there is evidence that there is an outbreak of this strain all over the world. It kills animals, including marine mammals. Even bears in Alaska are dying from bird flu. The integrated seal monitoring program developed by our institute together with Compass will provide an opportunity to study the situation in depth and determine the reliable causes of death in the spring,” the ecologist added.

Assuming this is H5N1, this would be additional evidence of mammal-to-mammal transmission of the virus, along with its pathogenicity in marine mammals.  Last summer we saw reports from Maine and Quebec of H5N1 infected seals, but the numbers reported were nowhere near the size of this die off.

While we've not seen evidence of sustained or efficient human-to-human transmission of HPAI H5N1, each extended chain of mammalian transmission is another opportunity for the virus to improve its game.