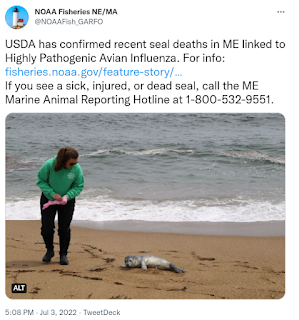 Although the HPAI H5N1 clade 2.3.4.4b virus causing our North American and European epizootic remains primarily a threat to avian species, we continue to see worrisome reports of increased spillovers - often with neurological manifestations - into mammalian hosts.

Human infections - while rarely reported and mild - have occurred (see here and here), and two months ago the CDC Added Zoonotic Avian A/H5N1 Clade 2.3.4.4b To IRAT List of influenza viruses with at least some pandemic potential.

Although HPAI H5N1 could evolve into a bigger human threat while circulating in birds, spillovers into mammals provide the virus with additional opportunities to adapt to new hosts.

We've known for decades that marine mammals are susceptible to influenza (see below).

But over the past decade - as avian influenza has increased it geographic range - we've seen an increasing number of seal die offs from the virus.

A trend that sadly continues into 2022, as NOAA Fisheries have been investigating a prolonged die-off of seals in Maine which began after HPAI H5N1 arrived in North America for the first time in 7 years.

Yesterday NOAA Fisheries announced that HPAI H5N1 has been detected in, and linked to the deaths, of 4 marine mammals (seals) in Maine.

NOAA Fisheries working with partners to determine the causes of death, and assess impacts.

Beginning in June 2022, Marine Mammals of Maine (MMoME)—a NOAA Fisheries authorized marine mammal stranding network partner—has responded to an elevated number of stranded seals. Most of the seals were found dead. On July 1, the U.S. Department of Agriculture’s Animal and Plant Health Inspection Service’s National Veterinary Services Laboratories confirmed that samples from four stranded seals in Maine have tested positive for Highly Pathogenic Avian Influenza H5N1. All of these animals had recently died or required euthanasia. USDA is notifying the Centers for Disease Control and Prevention as well as state animal and public health officials. The finding will be reported to the World Organization for Animal Health.

The current rate of dead seal strandings in this area is approximately three times the normal rate for this time of the year. During elevated stranding events such as this, the Marine Mammal Stranding Network collaborates with NOAA Fisheries to further investigate. They consider environmental conditions, common factors contributing to past stranding events, and any potential human impacts. They also obtain information on the causes of illness and death in the seals. The Network will continue to collect and analyze as new cases are documented. Response, recovery and sampling protocols for seals are in place and being led by MMoME.

Seal mortality events have occurred in southern Maine previously. The most recent Unusual Mortality Event in seals occurred in 2018 due to phocine distemper virus. These events can last for several months to several years. They are challenging when the event involves infectious diseases with the potential for spread across wildlife species and domestic animals or humans. Learn more about unusual mortality events.

NOAA Fisheries has established a coordinated response structure with MMoME, Atlantic Marine Conservation Society, and state and federal partners to manage this event. The response team is currently meeting on a daily basis to share information, support response logistics, and develop accurate public communications. This webpage will be updated on a regular basis as new information becomes available.

If you see a sick, injured, or dead seal in Maine, please call the Maine Marine Animal Reporting Hotline at (800) 532-9551. To report seal strandings south of Maine, please call the NOAA Fisheries Stranding Hotline: (866) 755-6622. According to the CDC, the health risk posed by avian fluto the general public is low; however, precautions are recommended.
Please do not touch live or dead seals, don’t allow pets to approach the seal, and observe the animal from a safe distance of 150 feet (safe for you and the animal).

(Continue . . . )
While HPAI H5 has been knocking at our door for more than 2 decades without causing a pandemic, it is also arguably more widespread, is affecting more mammalian hosts, and is more genetically diverse today than it has ever been (see Study: Global Dissemination of Avian H5N1 Clade 2.3.4.4b Viruses and Biologic Analysis Of Chinese Variants).

Perhaps we are worried unnecessarily, and there is some unknown `species barrier' that protects us (see Are Influenza Pandemic Viruses Members Of An Exclusive Club?), but it is also entirely possible we've just been lucky; and the H5 virus hasn't hit on the `right combination' of mutations to make it a pandemic contender.
The only thing that is certain is that nature's laboratory is open 24/7, and the more diverse the H5 virus becomes, the more opportunities it will have settle this question once and for all.
Posted by Michael Coston at 7:05 AM