Overnight news of an avian H11N1 virus, detected in an Eurasian Spoonbill in India, crossed the wires.  While not exactly startling news, it is interesting.

First a little background (feel free to skip ahead if this is familiar territory), then more on this finding.

Fair warning: I’ll have to keep this simple, so I can understand it.  Real experts may wish to avert their eyes . . .

Scientists have identified 15 16 different serotypes of Hemagglutinin (HA) and 9 serotypes of Neuraminidase (NA), which could theoretically yield 144 different HA/NA combinations.


Just over 100 have actually been isolated in nature.

But the flu universe is actually far more diverse than that might lead to you believe, since influenza’s 8 gene segments are largely interchangeable parts.

If you were to take two different influenza A viruses (say H3N2 and H5N1) and reshuffle them using reverse genetics, you can come up with 254 possible reassortments. 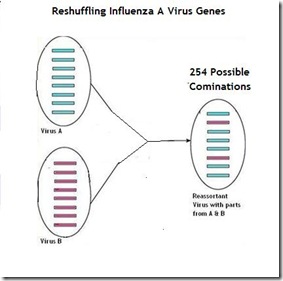 In fact, this has been done in the laboratory, as I detailed nearly a year ago in PNAS: H3N2 And H5N1 Reassortment.

Admittedly, many of these combinations might never occur naturally, but they do illustrate the potential that influenza has for generating reassortments.

And none of this begins to  consider the thousands of potential single amino acid substitutions that can further `customize’ a viral strain.

This mixing and matching of influenza viruses goes on constantly in nature, and while most of these combinations don’t turn out to be `biologically fit’, and are therefore evolutionary dead ends – more than a few prove competitive and capable of spreading.

Which brings us to today’s report in the Times of India.

While H11 avian viruses have been detected in aquatic birds in other parts of the world, this is the first time it has been found in India.  And this particular H11N1 is – according to this report – a new reassortment, distinct from other H11N1’s detected elsewhere around the world.

Proof once again that nature’s laboratory is open, and operating, 24/7.


H11 viruses have been known to infect humans, although how often this happens is completely unknown.   Like many avian viruses, H11 is thought to produce only mild symptoms, and is therefore likely to go undetected.

A fascinating bit of research, published in 2006 in the CDC’s EID Journal , looked for avian influenza antibodies in duck hunters and wildlife professionals.

We report serologic evidence of avian influenza infection in 1 duck hunter and 2 wildlife professionals with extensive histories of wild waterfowl and game bird exposure. Two laboratory methods showed evidence of past infection with influenza A/H11N9, a less common virus strain in wild ducks, in these 3 persons.

While antibodies to the relatively rare H11N9 virus were detected in these 3 individuals, antibodies for the far more common H4 and H6 avian viruses (known to circulate in American ducks) were not.

Which leads one to ask, why not?

One theory is that humans are less likely to develop long-lasting antibodies when exposed to avian-type influenza viruses.

In 1991, Beare and Webster published a study where 40 volunteers were inoculated with three avian influenza strains (H4N8, H6N1, and H10N7).

While 11 subjects had mild clinical symptoms, none developed a detectable antibody response.

This was presumably because virus multiplication was limited and insufficient to stimulate a detectable primary immune response. Avian influenza viruses comprise hemagglutinin (HA) subtypes 1-14 and it is possible that HA genes not so far seen in humans could enter the human influenza virus gene pool through reassortment between avian and circulating human viruses.

This is a theme revisited in a more recent study, the PNAS paper entitled Early and sustained innate immune response defines pathology and death in nonhuman primates infected by highly pathogenic influenza virus by Carole Baskin et. al., which analyses the pathogenesis of the H5N1 virus compared to seasonal flu, and 1918-like viruses.

In that study, the authors found:

The H5N1 infection also resulted in prolonged margination of circulating T lymphocytes and notable apoptosis of activated dendritic cells in the lungs and draining lymph nodes early during infection.

In the simplest language, dendritic cells help `teach' the adaptive immune system how to recognize a virus, and are key in the creation of pathogen-specific antibodies.

Theoretically, a loss of dendritic cells at the site of infection (lungs) could negatively impact the body's ability to generate post-infection immunity.

Even when clinical symptoms are severe.

Other possibilities as to why H11 viruses were detected in these subjects, but not the more common avian strains, include:

The authors of the 2006 Iowa study conclude by saying:

The relative lack of antibody response in our study population, who had substantial exposures to waterfowl with influenza A infections, and in inoculated volunteers from Beare and Webster (12) suggests that avian influenza infections in humans exposed to wild waterfowl may occur more commonly than we are able to detect with current methods.

Although the sample size of our study was relatively small, our results suggest that handling wild waterfowl, especially ducks, is a risk factor for direct transmission of avian influenza virus to humans.

Every year billions of people around the world experience flu-like symptoms that can stem from any of hundreds of different viruses.

Of those, only the tiniest fraction are tested to see what pathogen caused the illness.

In recent months we’ve seen the emergence of a small number of trH3N2 swine influenza infections.   Like avian influenzas, swine-origin influenzas probably jump to humans more often than we realize.

Luckily, these viruses generally produce mild symptoms, and are not well enough adapted to humans to replicate, or spread, efficiently.  Every once in a great while, though, a biologically `fit’ virus makes the jump.

Which is why increased surveillance in humans and in livestock - around the world - is desperately needed. Early detection of an emerging virus might allow for containment.

Posted by Michael Coston at 7:44 AM