Nine days ago I wrote about the ongoing swarm of earthquakes occurring in and around Guy, Arkansas in a blog called USGS: The Arkansas Earthquake Swarm. Since then the temblors have continued, with the latest being a 4.7 and a 3.8 magnitude quake overnight. 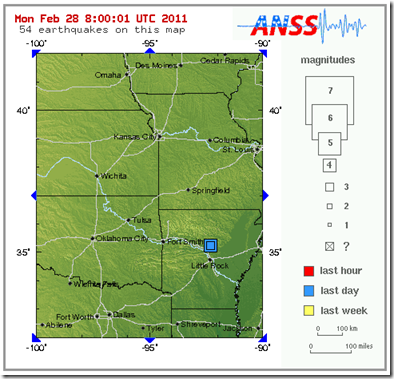 Note: The two latest shocks (depicted by the blue boxes) are obscuring an additional 52 smaller quakes in the past 7 days in this graphic.

While a bit unnerving for local residents, based on the USGS produced shake map for last night’s shallow 4.7 magnitude event, the quake was likely to be only moderately felt north of Little Rock, and damage – if any – should be `very light’. 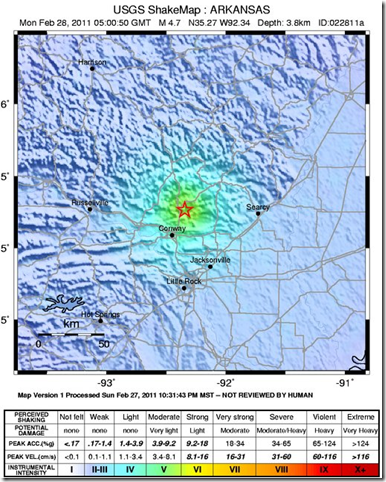 Arkansas is no stranger to seismic events, although the main quake dangers are focused more in the northeast corner of the state, and associated with the New Madrid fault line. 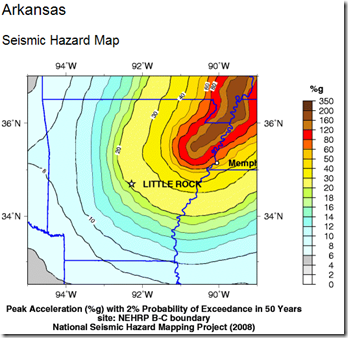 Strong – even damaging quakes – have occurred outside of the New Madrid region in Arkansas over recorded history.  On the University of Arkansas’s (Little Rock) earthquake history page you’ll find descriptions of a number of quakes over the past 200 years.

One of the largest in recent memory occurred on New Year’s Day, 1969, and is briefly described:

On January 1, 1969, a tremor centered about 19 miles northwest of Little Rock and caused much commotion in the area. In Little Rock, plaster cracked, and furniture was moved about in some homes; and trees and utility wires swayed and shook throughout a wide area. The shock was also noted by residents in southern Missouri and western Tennessee.

In 1982 and again in 2001 a prolonged series of temblors struck very near the same region as we are seeing activity today, in what was called the Enola Earthquake Swarms.

Enola is located only 20 miles or so to the south-east of this current area of activity. The Arkansas Geological Survey website gives a nice accounting of this swarm.

The Enola swarm was initiated by a magnitude 1.2 earthquake recorded on January 12, 1982 near the town of Enola in Faulkner County, Arkansas. Since then, over 40,000 seismic events have been recorded in the Enola area. Most of the recorded seismic events are microquakes, but at least 93 earthquakes have been felt in the local area by at least one person during the first year of seismic activity. Earthquake magnitudes have not exceeded a 4.5, which occurred on Jan. 21, 1982. No structural damage has ever occurred, although there have been reports of broken china.

As far as whether these latest shocks are a harbinger of bigger things to come?   The USGS has this to say about earthquake swarms east of the Rockies.

Earthquake swarms are common east of the Rocky Mountains; although none of the others have involved so many small earthquakes as the central Arkansas swarms. Scientists don't know why swarms start, why they stop, or how long to expect them to last.

The possibility of a larger earthquake cannot be discounted but none of the other swarms have given us any reason to expect an earthquake large enough to cause significant damage in central Arkansas in the near future.

Most of North America east of the Rocky Mountains has infrequent earthquakes that can strike anywhere at irregular intervals. The causes of earthquakes are not understood well enough for us to predict earthquakes reliably.

Since earthquakes are unpredictable, the only rational response if you live in a seismically active area is to be prepared to deal with one if it happens.

In Because It Can Happen Here, I provided a long list of preparedness links, which I would encourage you to follow.

FEMA, READY.GOV and the American Red Cross all strongly encourage you to be prepared to deal with a wide range of emergencies, including earthquakes, fires, tornadoes, floods, or hurricanes.

They know that during a major crisis, they may not be able to provide assistance to everyone during the first crucial 72 hours.

You and your family need to be capable of fending for yourselves, and hopefully helping your neighbors, until help can arrive and services are restored.

As Ready.gov reminds us:

Posted by Michael Coston at 4:09 AM