A Look At Europe’s Seismic Risks

While the earthquake risks in Japan and the United States are oft discussed, for Europe it is less so. Yet Europe is hardly immune from the threat.

If you say `earthquake’ and `Europe’ in one sentence, most people would assume you were talking about Italy, or perhaps Greece.  Eastern and central Mediterranean regions after all, are well known for seismic activity.

But two of the strongest earthquakes to strike Europe over the past millennium occurred in Switzerland  and Portugal.

And as the following Seismic Hazard Map (produced by GSHAP – Global Seismic Hazard Assessment Program) shows, other areas of western, central and northern Europe are vulnerable as well. 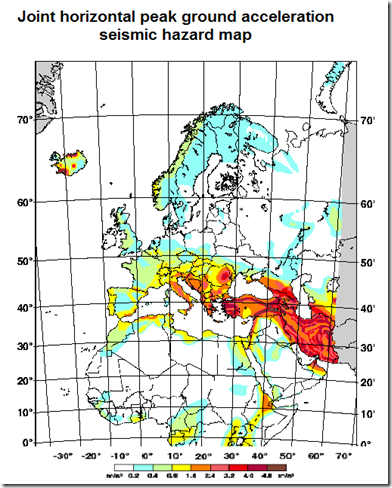 Minor earthquakes are not uncommon in Europe.

According to the Centre Sismologique Euro- Méditerranéen (CSEM) there have been over 600 (mostly minor) Euro-Med earthquakes recorded over the past two weeks. 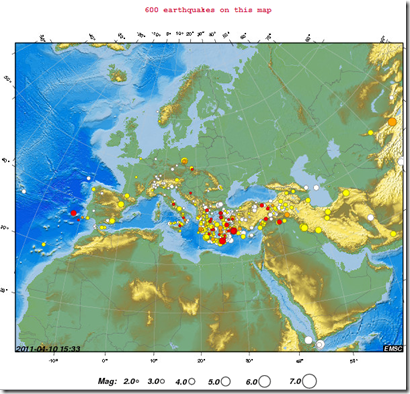 Large earthquakes are rare in central, western, or northern Europe.

But they are not unheard of.


In 1356, on the evening October 18th - the Feast day of Saint Luke the Evangelist – perhaps the strongest quake in central Europe’s history struck in the evening, destroying the Swiss town of Basel and leveling practically every major structure within 30 kilometers of the city.


The quake was preceded by a foreshock between 7 and 8 pm, with the main quake striking around 10pm.  It was felt as far away as  Zürich, Konstanz and even in Île-de-France.

While seismographs were not invented 650 years ago, estimates put this quake at between 6.2 and 6.5 on the modern Richter scale. 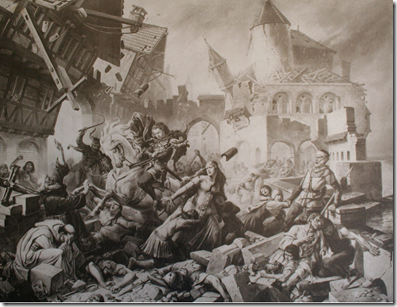 The Swiss take the threat of another major earthquake seriously, and in 2006 – on the 650th anniversary of the Basel quake, they (along with neighbors Austria and Liechtenstein) conducted a 3-day disaster drill that simulated a 6.0+ earthquake in the Rhine Valley.

Swiss emergency officials have been participating in a huge cross-border earthquake preparedness exercise to learn how to deal with strong tremors.

In 1755, on November 1st (All Saint’s Day), what would prove to be one of the deadliest earthquakes to ever strike Europe literally destroyed Lisbon, Portugal along with dozens of fishing villages along the coast, and sent Tsunami waves crashing into the UK, Northern Africa, and the Caribbean.

Most of the city’s 250,000 residents were gathered in churches and cathedrals on that Sunday morning, when a little after 9:30 am a terrible rumbling noise was followed moments later by intense shaking that lasted several minutes, collapsing most of the city’s buildings.

The quake, which occurred a couple of hundred kilometers offshore, was estimated to have been 8.2 or greater on the Richter scale.

The worst, however, was yet to come.

Fires spread quickly among the ruins, engulfing the city of Lisbon, turning the city into an inferno that would burn for days.


Minutes after the quake, a tsunami struck along the south coast of Portugal, reportedly washing over the tall cliffs of Sagres .

Fishing boats, and entire villages, were swept away.


Around 11am the first of three  tsunami waves struck Lisbon, farther north along the coast.

Although considerably reduced in height (estimated at 5 meters), they funneled into the city via the Tagus river estuary causing great damage and loss of life.

For a fascinating contemporaneous eye-witness account of the destruction of Lisbon, I would direct you to:

Farther north, a 3-meter tsunami struck at Cornwall on the Southern English coast. And in Galway, Ireland waves damaged the `Spanish Arch’ section of the city wall.

Tremendous tsunamis (20+ meters) were reported in Northern Africa, and smaller waves washed ashore in the Caribbean and the Atlantic Coast of the New World many hours later. 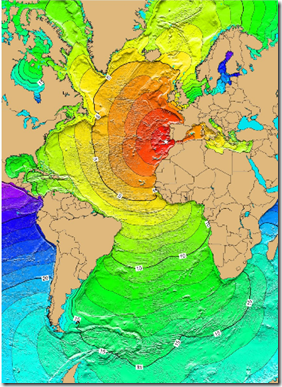 Tsunami Travel Times from the 1755 Quake

Although accurate numbers are impossible to come by, in Lisbon alone the death toll is estimated at between 10,000 and 100,000.  Most historians place the number at the high end of that range.

Lest anyone think this is simply `ancient history’ -  never to be repeated - a somewhat smaller quake (7.8 magnitude) struck in roughly the same area in 1969.

While damage was moderate, and only a minor (1+ meter) tsunami was generated, 13 people were killed and many more injured.

The bottom line is that earthquakes (and tsunamis) can and do occur in Europe.  While rare, they can produce catastrophic results.


Places that seldom see seismic activity tend not to mandate the construction of earthquake resistant buildings and infrastructures. Meaning that a lesser quake could conceivably do more damage than a stronger quake in a better prepared region.

Of course, a quake of the magnitude of Lisbon in 1755 or Basel in 1356 may not happen in our lifetimes.

They are, after all, exceedingly rare events.

But there are enough uncertainties in life on this spinning orb to make preparation for any kind of disaster – regardless of its origin or cause – time and money well spent.

Today there are millions of people in safe and comfortable homes all around the world watching the awful events in Japan, naively thankful that `it can’t happen here’.

Bad things happen somewhere practically everyday. Sometimes to just a few, and sometimes to a lot of people at once.

And when they do, the advantage goes to those who are prepared to deal with them.

To access my essays on personal, community, and business preparedness click here  or select the PREPAREDNESS link on the quick search atop my sidebar.