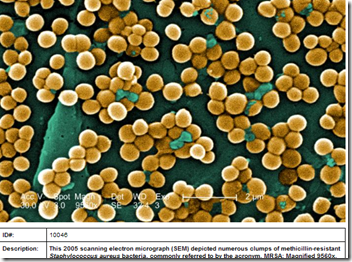 If you happen to be an exotic, emerging, and antimicrobial resistant strain of bacteria, then this has  obviously been a big week for you.

Not only do we have a major outbreak across Europe of Shiga toxin-producing E. coli resulting in hundreds of cases of hemolytic uremic syndrome (HUS), and a new report of the nasal carriage of MRSA by firefighters  – we’ve now news this morning on a new strain of MRSA spreading in the UK.

Two studies appear this week (one in The Lancet, the other in Antimicrobial Agents and Chemotherapy ) each independently identifying what are very closely related new strains of MRSA (Methicillin-resistant Staphylococcus aureus) that has been detected both in cows and in humans.

Admittedly, even the titles of these two studies are daunting. But luckily we’ve a number of resources that help explain the matter available to us.

First, the press release from the American Society for Microbiology, which describes the AAC study.

WASHINGTON, DC -- June 2, 2011 -- A distinctly new type of methicillin resistant Staphylococcus aureus (MRSA) that is not detected by traditional genetic screening methods has been discovered in patients in Irish hospitals according to research to be published in the journal Antimicrobial Agents and Chemotherapy. These findings provide significant insights into how new MRSA strains emerge and highlight the potential for the transmission of infectious agents from animals to humans.

Not only is this new type of MRSA `distinctly different’  from previously described strains it is not identified as antibiotic resistant by conventional and real time DNA-based polymerase chain reaction (PCR) assays.

Which means that humans (or animals) infected with this strain might be treated with ineffective antibiotics, based on standard testing protocols.

From the press release above:

Commenting on the significance of the findings, Professor David Coleman from the University of Dublin said: "The results of our study and the independent United Kingdom study indicate that new types of MRSA that can colonize and infect humans are currently emerging from animal reservoirs in Ireland and Europe and it is difficult to correctly identify them as MRSA. This knowledge will enable us to rapidly adapt existing genetic MRSA detection tests, but has also provided invaluable insights into the evolution and origins of MRSA."

For more on The Lancet study, we’ve a couple of newspaper reports from the UK.

The superbug MRSA has been found in the milk of British cows for the first time, scientists have warned.

While the impact on human health from this `new strain’ of MRSA has thus far been limited (less than 100 known infections in the UK since 2008), researchers say the rate is increasing each year.

Lead researcher Dr. Mark Holmes, at a news conference on Thursday, was quoted as saying:

"Although there is circumstantial evidence that dairy cows are providing a reservoir of infection, it is still not known for certain if cows are infecting people, or people are infecting cows. This is one of the many things we will be looking into next”

"Drinking milk or eating meat is not a health issue, as long as the milk is pasteurized," he added that the process of making cheese also "generally kills most of the bacteria".

The authors call it a "credible hypothesis" that the overuse of antibiotics in order to increase production of dairy and meat products may be driving the evolution and emergence of these new resistant strains.

For more on the overuse of antibiotics on farms, and the rise of antimicrobial resistant bacteria, I would strongly recommend visiting Maryn McKenna’s Superbug Blog and reading her 2010 book Superbug: The Fatal Menace of MRSA.

Some of my earlier blogs on this subject include:

The Biohazard In Your Butcher’s Case

UPDATE:  Tara C. Smith, Assistant Professor of Epidemiology, and science writer extraordinaire has detailed look at these new strains on her Aetiology Blog.

When is MRSA not MRSA?

Posted by Michael Coston at 8:46 AM