The World Health Organization has published a 12-page document (dated 9/29) – that summarizes recent global activity of A(H5N1) and A(H9N2) avian influenza viruses and describes the current status of candidate vaccines under development.

Similar reports have been issued twice each year since 2006.

This latest report may be read, and downloaded at: 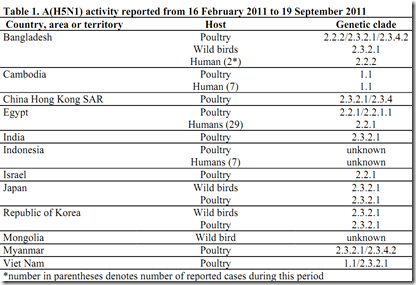 As you can tell by the above chart, the H5N1 virus continues to diversify into additional clades - and there  remain substantial gaps in our knowledge of the virus – particularly among strains circulating in Indonesia.

The spread of the 2.3.2.1 clade of the virus – which was the subject of an FAO announcement (see FAO Warns On Bird Flu) a month ago – is particularly  pronounced in this report with detections in Bangladesh, China Hong Kong SAR, India, Japan, the Republic of Korea, Myanmar, and Vietnam.

This `new’ clade differs antigenically from the poultry vaccines currently being used in many Asian countries, and the concern is that a new wave of bird flu may spread through poultry this winter.

This document summaries this new clade by saying:

Although  there is some genetic  (Figure 3) and antigenic heterogeneity  among  viruses of this
clade, recently  isolated viruses reacted well with post-infection ferret antisera against either A/Hong
Kong/6841/2010  (an  A/Hubei/1/2010-like virus)  or  A/barn swallow/Hong Kong/D10-1161/2010
(Tables 2 and 3), from which candidate vaccine viruses have been developed (Table 5).

While newer 2.3.2.1 clade samples reacted well against a couple of candidate vaccines already selected, the 2.3.4.2 clade out of Bangladesh does not. Therefore, the development of a new clade 2.3.4.2 candidate vaccine virus is proposed.

Similarly, after the detection of a human infection by the avian H9N2 virus in Bangladesh earlier this year, a proposal has been made to develop a candidate vaccine for that strain as well.

And lastly, the document addresses the detection of several SOIV (Swine Origin Influenza Virus) infections this year in Indiana, and Pennsylvania.

Swine influenza A(H3N2) viruses are enzootic in swine herds of North America and other parts of the
world. Characterisation of recent A(H3N2) viruses from swine in North America indicates that their HA genes have evolved from the human virus precursors that circulated in the mid-1990s. Isolation of swine-origin influenza viruses (SOIV) A(H3N2) from humans has been reported infrequently.  The United States of America reported eight infections due to A(H3N2) SOIV between January 2005 and 15 February 2011.

There have been four human infections  with A(H3N2) SOIV  in the states of Indiana (1) and Pennsylvania (3), United States of America, in this period. The HA and neuraminidase genes of these four viruses were similar to those  of swine viruses that circulate  in the United States  of America.


Sequencing data indicated that the  matrix  genes of these viruses were acquired  from an A(H1N1)pdm09 virus, unlike SOIV isolates from previous human cases.

Antigenic analysis indicated that these viruses were distinct from currently circulating human  A(H3N2)  viruses  but  similar to  swine A(H3N2) viruses from previous years as well as to A/Minnesota/11/2010 (H3N2) SOIV (Table 7), from which a candidate vaccine virus is under development.

Avian viruses, like all influenza A viruses, are constantly under pressure to change and mutate, looking for a biological advantage. Most of these mutations, thankfully, are evolutionary dead ends and fail to spread and thrive.

But in this viral version of king-of-the-hill, nature occasionally produces a more `fit’ and competitive virus, and it begins to dominate and spread.

Which is why continual monitoring of the genetic and antigenic changes in these viruses is so crucial.  As avian viruses evolve, new candidate vaccines must be developed, else we could be caught flat footed if a pandemic suddenly began.

Having a candidate vaccine already in hand could save weeks in the time it would take to produce and deploy an emergency vaccine.

And during a severe pandemic, a few weeks delay could translate into the loss of thousands of lives.

Posted by Michael Coston at 2:40 PM