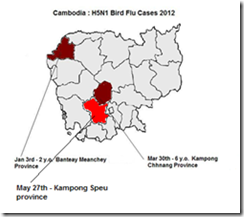 Yesterday we learned of a third H5N1 fatality this year in Cambodia, that of a 10 year-old girl from Kampong Speu Province (see Cambodia Announces Bird Flu Fatality).

Today the World Health Organization has posted an update on the case, with details provided by the Cambodian Health Ministry.

29 May 2012 - The Ministry of Health (MoH) of the Kingdom of Cambodia has announced a confirmed case of human infection with avian influenza A (H5N1) virus.

The case was a 10 years old female from Kampong Speu Province. She developed symptoms on 20 May 2012 and after initial treatment at the village was eventually admitted to the hospital on 25 May with symptoms of fever and shortness of breath. Infection with avian influenza A(H5N1) virus was confirmed by Institute Pasteur du Cambodge on 26 May 2012, however, despite intensive medical care, she died on 27 May 2012.

There are reports of recent deaths among poultry in her village and the patient prepared sick chicken for food prior to becoming sick.

The girl is the twenty-first person in Cambodia to become infected with A(H5N1) virus and 19 have died from the disease.

The National and local Rapid Response Teams (RRT) are conducting outbreak investigation and response following the national protocol. In addition, a public health education campaign is being conducted in the village to inform families on how to protect themselves from contracting avian influenza.

How many human infections (and deaths) have really occurred is a matter of some debate.

While the evidence for there being a lot of mild cases is sparse (see The Great CFR Divide), it does seem likely that we are missing some number of cases.

A couple of weeks ago in WHO: 2012 World Health Statistics Report, we looked at the lack of disease and mortality information available from many low-resource countries.

Among low income countries, only about 1% of deaths (and their causes) are recorded, while just 34 countries – representing 15% of the world’s population – produce high quality cause-of-death documentation. 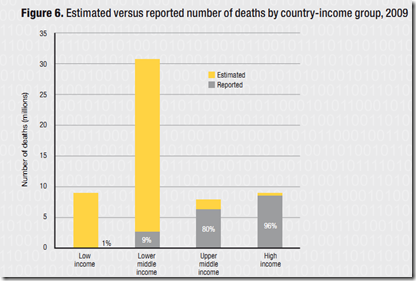 This helps to explain why there is so much ambiguity regarding the true prevalence of most diseases around the world, including H5N1.

While we continue to see isolated human infections around the world, and the virus continues to evolve (see H5N1: An Increasingly Complex Family Tree), for now H5N1 is primarily a threat to poultry.

The concern, of course, is that over time that could change.

And so the world remains at Pre-pandemic Phase III on the H5N1 virus, and we continue to watch for signs that the virus is adapting better to humans.

Posted by Michael Coston at 7:50 AM