At The End Of My Rope

I don’t generally include personal stories in this blog, but today a short exception, since it involved the use of some of my emergency preps, and I very nearly found myself in a bug-out situation.

Friday night, at a quarter to ten, I heard a loud crack! followed by a loud crash shook my whole house.

Except for a light drizzle, the weather was fine with no wind to speak of. So I was more than a little surprised to find a 30 foot limb from an oak tree had landed on my roof. 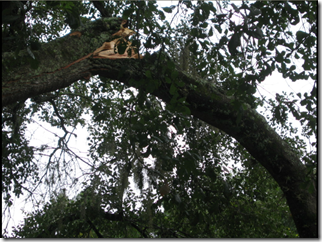 Most of the weight was still being held off the roof by the remnants of the slowly cracking limb, but disaster appeared imminent, and unavoidable.


I quickly gathered my bug out gear (moving it to a back entrance to the house, away from the impeding damage), then used my cell phone to arrange for some help at dawn’s early light.

The next morning, with the assistance of several other people (two with experience taking down trees ), we used ropes (some of which came from my emergency preps) to secure the main limb as we began to carefully remove the debris on my roof, a process that took several hours.

My preps also yielded safety goggles, for use with the chain saw.

With the main limb continuing to fracture, the big moment came when the cut had to be made separating the mess on the roof from the limb that was threatening to swing down and take out my Florida room at any moment.

Using guide ropes, we managed to swing the big limb away from the house as it came crashing to the ground, just missing the house.

It was a very near thing. 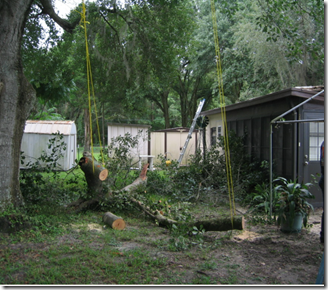 The best news is that no one was injured during this operation, but I had my first aid kit at the ready, just in case. Despite the ticking time bomb aspect of the continually cracking limb, we worked slowly, deliberately, and most importantly . . .  safely.

Thankfully, the massive limb was removed without incurring further damage to my home, which meant that the tarps in my emergency preps went unused.

I obviously could not have done this alone, and so my thanks go to Don, Paul, and Craig who came to my rescue.

I also received several offers of a place to stay from my `Disaster Buddies’ (see In An Emergency, Who Has Your Back?), should things have gone pear-shaped and my house had become temporarily uninhabitable.

While we tend to think of emergency preparedness as something we do in the event of an earthquake, hurricane, or flood . . .  smaller, but none-the-less serious events can make you glad you were prepared.

In this case having preps (first aid kit, tarps, ropes, cell phone, safety goggles, etc.), a bug out bag at the ready, and a network of friends and disaster buddies I could rely on in times of need helped to avert what could have been a very nasty outcome.

September is National Preparedness Month, but as this example demonstrates, preparedness is something we all should strive for 365 days a year. Because you never know when your world will be suddenly turned upside down by an unexpected emergency.

Posted by Michael Coston at 9:00 AM