WHO: Estimated Health Risks From The Fukushima Radiation Release 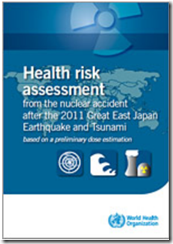 First some excerpts from the press release, then I’ll be back with a little more.

28 February 2013 | GENEVA - A comprehensive assessment by international experts on the health risks associated with the Fukushima Daiichi nuclear power plant (NPP) disaster in Japan has concluded that, for the general population inside and outside of Japan, the predicted risks are low and no observable increases in cancer rates above baseline rates are anticipated.

The WHO report ‘Health Risk Assessment from the nuclear accident after the 2011 Great East Japan Earthquake and Tsunami based on preliminary dose estimation’ noted, however, that the estimated risk for specific cancers in certain subsets of the population in Fukushima Prefecture has increased and, as such, it calls for long term continued monitoring and health screening for those people.

Experts estimated risks in the general population in Fukushima Prefecture, the rest of Japan and the rest of the world, plus the power plant and emergency workers that may have been exposed during the emergency phase response.

“The primary concern identified in this report is related to specific cancer risks linked to particular locations and demographic factors,” says Dr Maria Neira, WHO Director for Public Health and Environment. “A breakdown of data, based on age, gender and proximity to the nuclear plant, does show a higher cancer risk for those located in the most contaminated parts. Outside these parts - even in locations inside Fukushima Prefecture - no observable increases in cancer incidence are expected.”

In terms of specific cancers, for people in the most contaminated location, the estimated increased risks over what would normally be expected are:

For people in the second most contaminated location of Fukushima Prefecture, the estimated risks are approximately one-half of those in the location with the highest doses.

The almost-200-page document further notes that the radiation doses from the damaged nuclear power plant are not expected to cause an increase in the incidence of miscarriages, stillbirths and other physical and mental conditions that can affect babies born after the accident.

“The WHO report underlines the need for long-term health monitoring of those who are at high risk, along with the provision of necessary medical follow-up and support services,” says Dr Maria Neira, WHO Director for Public Health and Environment. “This will remain an important element in the public health response to the disaster for decades.”

This press release deals primarily with the relative increases in risk among populations living or working very close to the Fukushima nuclear accident who received the highest exposure to radiation.

While relative risk is a valid way of looking at this accident’s impact - it is also helpful to look at the absolute risk (which is done in the FAQ and in the actual report) - particularly when looking at cancers that have a low baseline rate.

None of which is meant to minimize the overall impact of this nuclear accident in the least, or the devastating individual and family impacts that these additional cancers will bring.


But it does help to put these numbers in perspective.

Additional resources from WHO on the Fukushima radiation release include:

And lastly, as the press release notes, cancers are not the only serious long-term health consequences from the Fukushima disaster.

As well as the direct health impact on the population, the report notes that the psychosocial impact may have a consequence on health and well-being. These should not be ignored as part of the overall response, say the experts.

Posted by Michael Coston at 7:33 AM