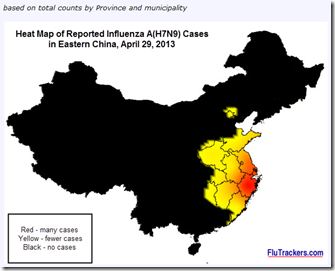 From the open access journal Chinese Science Bulletin, we’ve an early epidemiology and risk analysis of the emerging H7N9 virus in China that paints a particularly worrisome picture of where these authors believe this outbreak might be headed.

Dozens of human cases infected with H7N9 subtype avian influenza virus (AIV) have been confirmed in China since March, 2013. Distribution data of sexes, ages, professions and regions of the cases were analyzed in this report.

The results showed that the elderly cases, especially the male elderly, were significantly more than expected, which is different from human cases of H5N1 avian influenza and human cases of the pandemic H1N1 influenza.

The outbreak was rated as a Grade III (severe) outbreak, and it would evolve into a Grade IV (very severe) outbreak soon, using a method reported previously. The H7N9 AIV will probably circulate in humans, birds and pigs for years. Moreover, with the driving force of natural selection, the virus will probably evolve into highly pathogenic AIV in birds, and into a deadly pandemic influenza virus in humans.

Therefore, the H7N9 outbreak has been assumed severe, and it is likely to become very or extremely severe in the future, highlighting the emergent need of forceful scientific measures to eliminate any infected animal flocks. We also described two possible mild scenarios of the future evolution of the outbreak.

While conceding that this virus could `disappear naturally, or maintain its low pathogenicity in birds and limited transmission ability in humans for a long period’, the authors articulate eight reasons why they believe this outbreak poses – in their words – an `enormous risk’.

Rather than mangle their work by selectively excerpting pieces, I’ll invite you to follow the link to read this analysis in its entirety.

I suspect that this paper will induce a fair amount of heartburn among Chinese officials who are trying to reassure the public over this outbreak.

As to whether these researchers have got this analysis right?

I believe they make some very good points, but that’s really above my pay grade. Besides, I make it a practice not to try to predict what flu viruses are apt to do.

I simply accept that novel flu viruses are unpredictable, and fully capable of wreaking havoc on a global scale, and so they ought not be underestimated.

Which is precisely why the CDC, along with other public health agencies, are taking prudent steps towards increasing their pandemic preparedness (see H7N9 Preparedness: What The CDC Is Doing).


Not because they are necessarily convinced that this virus will spark the next pandemic.

But because they know it could.

Posted by Michael Coston at 3:59 PM