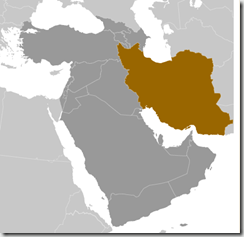 Two weeks ago, in  Iran’s MOH Reports 2 MERS Cases, we saw the first official acknowledgement of MERS cases by the Iranian government. In the days that followed, we saw reports that additional cases were being tested, but no more cases have been officially announced.

Today the World Health Organization has published the following GAR (Global Alert & Response) update on these first two cases, which clarifies some aspects not exactly made clear in the earlier (machine translated) reports.

What is of particular interest is that this report describes an unusual `chain of infection’ - one that starts with an unidentified `woman who had an Influenza Like Illness (ILI) and had travelled to Saudi Arabia to perform Umra’ , who appears to have infected an Iranian woman (with no history of travel or camel contact) sometime in early May, who in turn, is suspected of infecting her younger sister (who also had no travel history or camel contact).

No details on this first suspected case are provided, but the epidemiological investigation continues.

On 26 May 2014, the National IHR Focal Point of the Islamic Republic of Iran reported to WHO the first 2 laboratory confirmed cases of infection with Middle East respiratory syndrome coronavirus (MERS-CoV). The 2 patients are sisters and residents of Kerman Province.

The following details were provided to WHO:

All close contacts of the above mentioned cases, including family members, other patients in the hospital, and health-care workers are currently under investigation by the provincial health authorities and the Iranian Centre for Disease Control. Some control measures have been put in place at the hospital where the two cases are hospitalized. Relevant information and instructions have been disseminated to relatives, airport personnel, pilgrims returning from Umra and travellers.

Globally, 683 laboratory-confirmed cases of infection with MERS-CoV including 204 related deaths have officially been reported to WHO. This global total includes all of the cases reported in this update, plus 44 laboratory-confirmed cases officially reported to WHO by Saudi Arabia between 19 May and 2 June. WHO is working closely with Saudi Arabia for additional information on these cases and will provide further updates as soon as possible