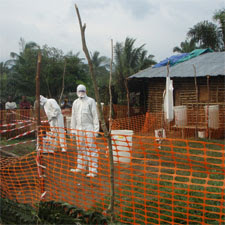 Even though we are just beginning to learn the details about New York City’s Ebola case – that of a Médecins Sans Frontières (MSF) volunteer doctor recently returned from Guinea – already the media are attempting to dissect his movements (see WPIX report NYC doctor rode subway before testing positive for Ebola at Bellevue) over the past couple of days.

While we can’t assume that every Ebola infected individual sheds virus on exactly the same timetable, the fact that Thomas Duncan’s family was exposed for several days before he was hospitalized – yet none developed the disease - suggests that Ebola cases are likely far less infectious early in their illness.

Nevertheless, the City of New York will have a huge job ahead doing contact tracing, monitoring, environmental cleanup, and public relations work as a result of this latest Ebola incident.  Some of these steps will be prudent or medically necessary, while others will be employed to reassure a jittery population.


While MSF volunteers treating Ebola cases are quite deservedly viewed as heroes, the societal and economic impact of dealing with this latest imported case will be substantial, and that will doubtless spark further debate over what restrictions should be in place for travelers arriving from Ebola hot zone countries.


Late yesterday MSF released the following statement regarding the protocols used by their staff during the 21 days after leaving Ebola affected nations.

Since the beginning of its operations in West Africa in March to combat the Ebola outbreak, Doctors Without Borders/Médecins Sans Frontières (MSF) has put in place stringent protocols to protect its staff from exposure to the Ebola virus and to monitor the health of its returning staff.

MSF has specific guidelines and protocols for staff members returning from Ebola assignments.  These guidelines govern the 21-day incubation period of the virus (it can take up to 21 days to display symptoms of possible Ebola infection). A fever that develops during the 21-day period may also be due to something other than Ebola, such as the flu. A fever that develops after the 21-day-period is not due to Ebola.

MSF pre-identifies health facilities in the United States that can assist and manage the care of our staff members in the event they develop symptoms after their return home. This pre-identification practice is carried out in coordination with the US Centers for Disease Control (CDC) and departments of health at state and local levels.

Upon returning to the United States, each MSF staff member goes through a thorough debriefing process, during which they are informed of our guidelines.

The guidelines include the following instructions:

1.    Check temperature two times per day
2.    Finish regular course of malaria prophylaxis (malaria symptoms can mimic Ebola symptoms)
3.    Be aware of relevant symptoms, such as fever
4.    Stay within four hours of a hospital with isolation facilities
5.    Immediately contact the MSF-USA office if any relevant symptoms develop

Our colleague in New York followed the MSF protocols and guidelines since returning from West Africa. At the immediate detection of fever on the morning of October 23, 2014, he swiftly notified the MSF office in New York.  He did not leave his apartment until paramedics transported him safely to Bellevue Hospital in Manhattan, and he posed no public health threat prior to developing symptoms.

While MSF is not in a position to comment on his medical condition or the care he is receiving, the organization sincerely wishes for his swift and complete recovery.

Steps Doctors Without Borders takes to ensure the health and well being of its staff and the community at large:

If returned staff members do not live within four hours of appropriate medical facilities, MSF will ensure they are accommodated appropriately during the 21-day incubation period.

In the unlikely event that a staff person develops Ebola-like symptoms within the 21-day period, he/she is advised to immediately contact MSF and to refrain from traveling on public transportation. Local health authorities are immediately notified.

As long as a returned staff member does not experience any symptoms, normal life can proceed. Family, friends, and neighbors can be assured that a returned staff person who does not present symptoms is not contagious and does not put them at risk. Self-quarantine is neither warranted nor recommended when a person is not displaying Ebola-like symptoms.

However, returned staff members are discouraged from returning to work during the 21-day period.  Field assignments are extremely challenging and people need to regain energy.  In addition, people who return to work too quickly could catch a simple bacterial or viral infection (common cold, bronchitis, flu etc.) that may have symptoms similar to Ebola. This can create needless stress and anxiety for the person involved and his/her colleagues. For this reason, MSF continues to provide salaries to returned staff for the 21-day period.