CDC: Ebola Is Not Likely To Become Airborne

Earlier this summer there was a good deal of unfounded concern (read: `hysteria’) that the Ebola virus was `airborne’, and that it could spread as easily as the flu virus (see  A Look Down The Ebola Rabbit Hole).  In fact, based on the `truth’ offered up by a number of conspiracy sites, we should all be dead by now.

Dr. Ian Mackay and I have both written extensively on why Ebola isn’t an `airborne virus’  (but that under certain circumstances it can be spread via droplets)  in blogs such as It's what falls out of the aerosol that matters.... & Ebola Risk Communications..

The other widely speculated possibility was that if Ebola isn’t airborne now, it might mutate and become airborne down the road.  While not impossible, many scientists view this as an unlikely outcome (see The WHO Weighs In On The Modes Of Ebola Transmission).

That said, over the years we’ve seen nature throw more than a few biological curveballs, which is why most of us have learned it is better never to say `never’.

Which, I suspect,  is why the CDC leaves just a little bit of wiggle room in their latest Ebola offering, called Why Ebola Is Not Likely To Become Airborne: 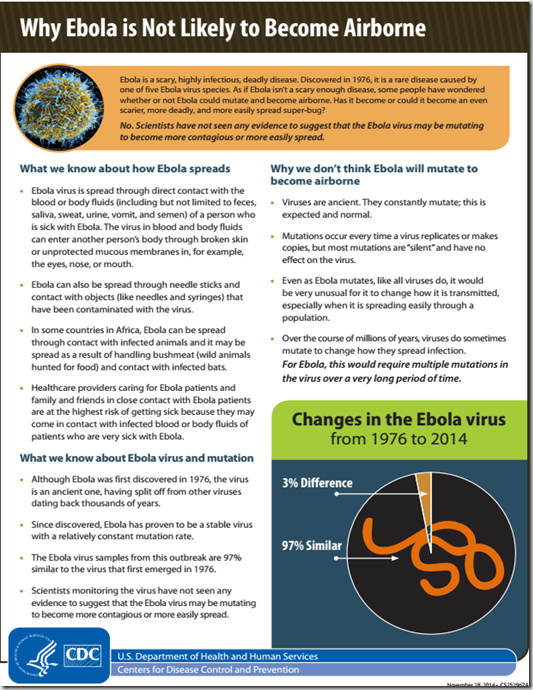 Admittedly, I’m not a huge fan of the `it hasn’t happened yet, so it isn’t likely to happen in the future’ school of logic, particularly since we are seeing long chains of human infection – something new with Ebola. But I also accept the CDC’s assessment that seeing an airborne Ebolavirus in the near term is probably highly unlikely.

Right now, I view the risks posed by emerging influenza and coronavirus strains to be of more immediate concern. Which makes the smart move to be pandemic prepared – regardless of the identity of the next pathogen to spark a global crisis.

Because as scary as Ebola is, there are plenty of other nasty viruses out there fully capable of ruining your whole day.


For some recent blogs on Pandemic Preparedness, you may wish to revisit:

Posted by Michael Coston at 2:53 PM