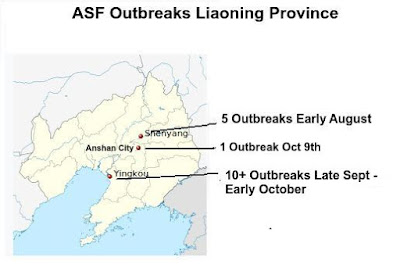 
The first few outbreaks were reported in and around Shenyang, followed in late September/early October by roughly 10 outbreaks around Yinkou.

The Information Office of the Ministry of Agriculture and Rural Affairs was released on October 9th, and an African pig swine epidemic occurred in Anshan City, Liaoning Province.

The positive samples were from a farmer in Tai'an County, Anshan City. The farmer had 460 pigs, 160 sickness and 160 deaths.

Immediately after the outbreak, the Ministry of Agriculture and Rural Affairs sent a steering group to the local area. The local government has started the emergency response mechanism in accordance with the requirements, and adopted measures such as blockade, culling, harmless treatment, disinfection, etc., to treat all the sick and culled pigs harmlessly. At the same time, all live pigs and susceptible animals and products are prohibited from entering or leaving the blockade. At present, the above epidemic has been effectively disposed of.


Although the `official' count varies from source to source, since early August China has reported roughly 3 dozen outbreaks across 8 provinces and/or territories.


While ASF doesn't pose a health risk to humans, it is truly a nightmare disease for pig producers - and with no vaccine available - the only way to control it is to cull all of the pigs that may have been exposed.

For more on the growing threat of ASF to China, its neighbors, Europe, and potentially the world, you may wish to revisit:

Posted by Michael Coston at 6:31 AM