The Saudi MOH has reported their 4th MERS case for Epi Week 42, making this the busiest reporting week since mid-July.  While only 4 cases were reported during the month of September, so far October has seen 10 cases identified.


This morning's case, posted sometime late yesterday on the MOH site, is dated October 19th, and involves a 70 y.o. male, listed as a `primary case', with unknown camel contact. 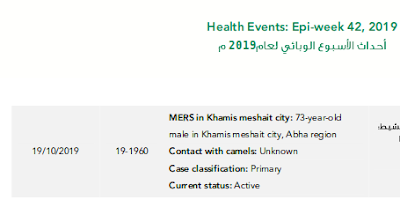 This is the second case reported from Khamis Mushait  - which lies in the far southwest of the country - in less than a week (see Oct 13th report).  The first involved a 26 y.o. female, again with unknown camel contact.


Although details in these reports are sparse, both are both listed as `primary' with unknown camel contact. The assumption is they are not epidemiologically linked, and are therefore community acquired cases.

They could have been infected via an environmental contamination (including from local camel products), or perhaps from exposure to a mildly ill or asymptomatic carrier of the virus in the community.

Since the initial signs of MERS infection are often similar to a cold or the flu, differentiating who is - and who isn't - infected can be a extremely difficult, even for doctors used to seeing cases (see Evaluation of a Visual Triage for the Screening of MERS-CoV Patients).

And while the jury is still out on how much of an infection risk an asymptomatic MERS patient poses, in recent years we've seen increasing evidence suggesting transmission to others is possible. Last December, we looked at:

The concern is, as chains of MERS infection increase, so do the number of opportunities for the virus to better adapt to human hosts.  And that, over time, could increase its transmissibility.


While MERS-CoV hasn't managed to spread the way that SARS did 16 years ago, we've seen studies (see A Pandemic Risk Assessment Of MERS-CoV In Saudi Arabia) suggesting the virus doesn't have all that far to evolve before it could pose a genuine global threat.

Last year, in the WHO List Of Blueprint Priority Diseases, the World Health Organization listed MERS-CoV listed among the 8 disease threats in need of urgent accelerated research and development.