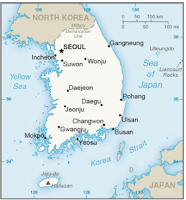 South Korea reported their first (imported) COVID-19 case on January 1st, 2020 - and over the next 30 days would report just 31 cases - a blend of both imported and sporadic locally acquired cases.

Yesterday morning (EST), the case count had doubled to 204 cases in only 24 hours.  And twenty-four hours later, we see is has (more than) doubled again, to 433 cases.

This explosive growth has been primarily driven by two large clusters; among the congregation of Shincheon Daegu Church, and linked to patients, staff, and visitors to Qingdao Daenam Hospital in Cheongdo.

The 1600hrs (KST) update from South Korea's CDC adds 87 cases since their morning update, more than half (n=45) of which are linked to the Shincheon Daegu Church. 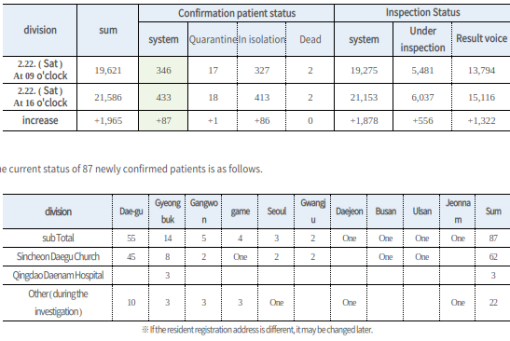 Overnight the South Korean CDC released an analysis of the first 346 cases (see translated excerpts below), which found that nearly 80% of South Korea's cases are linked to either Shincheon Daegu Church (48%), or Qingdao Daenam Hospital (31%).

* 111 if including three added by the 11th briefing today

□ In response to the case of Shincheon Daegu Church, the immediate response team is conducting an epidemiological investigation along with Daegu Metropolitan City with active protection measures.

○ We have a list of members of the Shincheon Daegu Church in Daegu to check for symptom by wire contact *, guide the self-isolation, and promptly inspect any symptoms.
* 1,261 (13.5%) out of 9,336 said they had symptoms (Daegu Metropolitan City data)

-We are also conducting a survey on the immigration details of the members.

It is estimated that cases exposed to infectious agents introduced before February 7 have been incubated in the first stage since February 7 and the second since February 14, and this pattern is observed every weekend on religious events (Sunday February). , On February 2, 9 and 16) or in small groups, suggests that limited or continuous preaching has occurred within the group.

-Therefore, believers who attended the meetings of Shincheon Daegu Church during this period thoroughly implement self-isolation measures, and if they have fever or respiratory symptoms, first contact the local public health center or the Center for Disease Control and Prevention (1339), and follow the instructions. It was recommended to see a doctor at the nearest screening clinic.

-In addition, secondary preaching may occur to people who have been in close contact with Shinto family members or other closed spaces, so those who visited Shincheon Daegu Church in February or contacted Shinto and visitors should stay in their homes and avoid fever as much as possible. Or, if you have respiratory symptoms, you should contact your local public health center or the Center for Disease Control and Prevention (1339).

-In addition, Daegu citizens recommended minimizing group events in closed spaces and refraining from outside activities.

□ The progress of epidemiological investigations related to the case of Qingdao Daenam Hospital was announced.


○ A full survey * of workers in hospitals and hospitalized patients is underway, and 111 confirmed patients * out of a total of 256 patients (254 without deaths) have been identified.

* 9 staff including medical staff and 102 inpatients (including 2 deaths)

-The incidence of patients in the hospital was centered on the psychiatric ward. Among the confirmed patients, patients with pneumonia were transferred to other hospitals for quarantine treatment.

-Confirmation patients who are admitted to the mental ward will be cohort quarantined in the hospital, and insufficient medical personnel will be treated with medical personnel of the National Mental Health Center.

In addition, patients who are admitted to general wards other than the psychiatric ward will be able to self-contain after discharge.

-The second case of death related to Qingdao Daenam Hospital (born 65, female) was confirmed to have died of fever after a fever started on February 11 during a long hospital stay.

□ The National Defense Agency's headquarters says that the current situation is spreading in some regions and groups, and it is necessary to quickly find patients in the regions and group members, promptly isolate the patients, and proceed with active treatment. Most importantly, he said he would do his best to protect the health and safety of the people.

○ The general public also cooperated and requested that they fully understand the Corona19 Code of Conduct and observe it in their daily lives and actively participate in overcoming the infectious disease crisis.

COVID-19 has a much longer incubation period, and patients tend to experience a slower buildup of symptoms, resulting in a lot of people who only become obviously ill enough to seek medical care 2 or 3 weeks after exposure.

While having 80% of South Korea's cases linked to two clusters should still make it possible (albeit a tall order) to contain this outbreak, we don't know how many cases are incubating unseen in the community, still a week or more away from being detectable.


The trends we see over the next few days - particularly if we see a jump in cases not epidemiologically linked to the church or hospital clusters - will tell us a lot.

Posted by Michael Coston at 5:32 AM