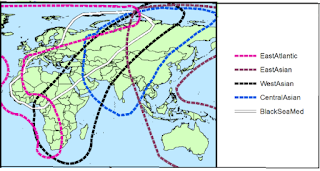 While once the topic of heated debate (see Bird Flu Spread: The Flyway Or The Highway?). the role of migratory birds in the long-distance spreading avian influenza is now pretty much settled. Despite protestations that `sick birds don't fly', we now know that many avian species can carry HPAI viruses asymptomatically.

A study, published in 2016 (see Sci Repts.: Southward Autumn Migration Of Waterfowl Facilitates Transmission Of HPAI H5N1), posited that waterfowl can pick up new HPAI viruses in the spring (likely from poultry or terrestrial birds) on their way to their summer breeding spots - where they spread, amplify, and potentially evolve - only to redistribute them on their southbound journey the following fall.

Which is precisely where we find ourselves today, with the fall bird migration in full swing in the Northern Hemisphere -  and for the second year in a row - a high level of avian flu activity both in Europe and in Asia.   A few recent blogs include:

Over the past 48 hours the UK has reported 3 new outbreaks.  This report from DEFRA:

While overnight South Korea reported their 6th outbreak in Poultry., and Japan reported a dead Hooded Crane at the Izumi wildlife preserve tested positive for the H5 avian virus.

While most of these avian influenza viruses are primarily a threat to wild birds and poultry, a few subtypes (H5N1, H5N6, H7N9, H7N7, H7N2, H10N3, H9N2, etc.) have been known to jump species and infect humans, sometimes producing serious - even fatal - illness.

Currently, the Asian H5N6 strain is atop our watch list (see yesterday's WHO: Assessment of Risk Associated with Influenza A(H5N6) Virus).  Given the continual evolution of avian flu viruses - and their ability to reassort amongst themselves - new threats can always arise with little warning.

With more than 40 countries reporting avian flu outbreaks since May of 2021 - and likely more outbreaks going unreported - on Friday the OIE issued the following press release on Friday.

Various subtypes of high pathogenicity avian influenza have been reported by more than 40 countries over the last six months. During the high-risk period of this disease, October to April, countries need to scale up surveillance efforts, implement strict biosecurity measures and ensure a timely reporting of outbreaks to curb its spread.

Paris, 19 November 2021 – Since 1 May 2021, outbreaks of high pathogenicity avian influenza (HPAI) have been confirmed in 41 countries from different regions in poultry and wild birds. Currently present in Africa, Asia and Europe, the disease is a threat to economic stability, food security and livelihoods. Commonly known as bird flu, avian influenza is a very contagious disease which affects several species of poultry, as well as pet birds and wild birds, and occasionally, humans. This complex disease is caused by viruses divided in multiple subtypes whose genetic characteristics rapidly evolve. Over recent years, numerous subtypes of the HPAI viruses have been circulating in diverse bird populations on a large geographical scale. In particular in 2021, an unprecedented genetic variability of subtypes has been reported in birds, thus creating an epidemiologically challenging landscape. H5N1, H5N3, H5N4, H5N5, H5N6 or H5N8 are the subtypes currently circulating in poultry and wild bird populations across the world.

The seasonal pattern of avian influenza has been well demonstrated over the past decade, with most outbreaks occurring during the winter of the Northern hemisphere. Given the data reported by countries to the World Animal Health Information System (OIE-WAHIS), the seasonal dynamics can be better anticipated: outbreaks usually begin to increase in October, peak in January and continue through April. Nearly 16,000 cases of HPAI in domestic and wild birds have already been reported this October, signalling the increased risk of virus circulation. On rare occasions, the disease can also pose a risk to human health and thus far, some recent human cases have been associated with the subtype H5N6 currently in circulation. Avian influenza is therefore one of the priorities of the Tripartite Alliance (FAO, OIE and WHO) and needs to be tackled under a One Health approach .

It is critical that countries notify outbreaks in a timely manner to the OIE, to ensure an accurate monitoring of the evolution and spread of this transboundary disease. HPAI cases identified in poultry and non-poultry species, including wildlife are subject to notification. Updated reporting obligations will come into effect from 1 January 2022 onwards. Countries will also be requested to report infections with low pathogenicity avian influenza viruses identified in domestic and captive wild birds and that have proven natural transmission to humans associated with severe health impacts. OIE Reference Laboratories specialised in avian influenza can support national laboratories in the diagnostic of their samples, as needed by countries.

Because of the disease impacts on the livelihoods of poultry farmers and on international trade, as well as the risks of transmission to humans, the animal health sector must implement strict biosecurity measures in farms, in commerce and in live bird markets to prevent it from spreading. For instance, isolating infected birds from healthy ones and cleaning and disinfecting poultry premises is highly recommended. Proper planning and the implementation of surveillance programmes in wild birds, as well as, avoiding direct or indirect contact between domestic and wild birds is equally critical in mitigating outbreaks in domestic poultry and preventing the introduction of the virus into flocks. Thus, the OIE urges countries to maintain their surveillance efforts and to continue timely reporting of avian influenza outbreaks in both poultry and non-poultry species including wild birds.

While H5 and H7 avian flu viruses have never acquired the ability to spread efficiently between humans, each year we see new studies and analyses suggesting they continue to evolve toward a more `mammalian' adapted virus.

We've looked at several such reports published over this past summer and fall, including:

All reasons why the world needs to take the evolution of these viruses seriously, and greatly increase surveillance and reporting.