MERS-CoV: Largely Forgotten, But Not Gone 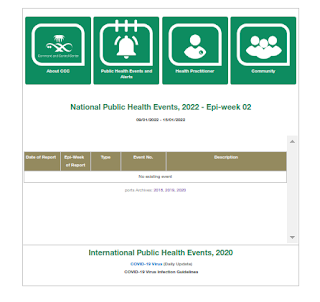 Until the emergence of the SARS-CoV-2 virus in China in late 2019, the biggest coronavirus threat facing the world came from MERS-CoV, which emerged on the Arabian Peninsula in 2012, and has sparked more than 2,500 cases (and nearly 900 deaths) since.

While not nearly as transmissible as SARS-CoV-2, MERS-CoV appears to be much deadlier than COVID, at least based on the known cases and deaths.  We've seen studies (see A Pandemic Risk Assessment Of MERS-CoV In Saudi Arabia) suggesting the virus doesn't have all that far to evolve before it could pose a genuine global threat.

Since the pandemic began, reporting of MERS-Cases by Middle Eastern nations - which has often left a lot to be desired - has plummeted (see WHO EMRO Chart below). Whether this reflects a genuine drop in MERS cases, or changes in surveillance and reporting isn't clear. 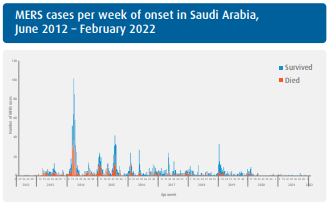 In their update last April, the WHO suggests that MERS cases are probably still occuring, but going unreported due to the pandemic.

The number of MERS-CoV cases reported to WHO has substantially declined since the beginning of the ongoing COVID-19 pandemic (Figure 2). This is likely the result of epidemiological surveillance activities for COVID-19 being prioritized, resulting in reduced testing and detection of MERS-CoV cases.

Admittedly, detecting MERS cases isn't always easy. Over the past decade we've looked at many of the challenges of MERS-CoV surveillance, including:

Even before the pandemic, we've seen estimates that the vast majority of MERS cases go undiagnosed (or unreported) in the Middle East (see EID Journal: Estimation of Severe MERS Cases in the Middle East, 2012–2016)

While roughly 90% of MERS cases have been reported from Saudi Arabia, the United Arab Emirates, Qatar, Jordan, Oman and Kuwait (combined) have reported more than 160 cases. As with Saudi Arabia, these are expected to be serious undercounts.

This week the WHO is reporting 2 new cases in Qatar - the first MERS cases reported by that country in 2 years - in the following update.

Outbreak at a glance

From 22 March to 3 April 2022, two laboratory-confirmed cases of Middle East respiratory syndrome coronavirus (MERS-CoV), including one death, were reported to the WHO by the National IHR Focal Point of Qatar. Both cases had frequent close contact with dromedary camels and consumption of their raw milk in the 14 days prior to the onset of symptoms. The Qatar Ministry of Public Health immediately initiated case investigation and contact tracing. These are the first cases of MERS-CoV infection reported from Qatar since February 2020. The notification of these cases reiterates the need for global awareness of MERS-CoV but does not change the overall risk assessment. WHO expects that additional cases of MERS-CoV infection will be reported from the Middle East and/or other countries where MERS-CoV is circulating in dromedaries.

Between 22 March and 3 April 2022, the National IHR Focal Point of Qatar reported two laboratory-confirmed cases of Middle East respiratory syndrome coronavirus (MERS-CoV) infection to the WHO.

MERS-CoV is a viral respiratory infection of humans and dromedary camels which is caused by a coronavirus called Middle East Respiratory Syndrome Coronavirus. Infection with MERS-CoV can cause severe disease resulting in high mortality. Approximately 35% of reported patients with MERS-CoV have died, but this may be an overestimate of the true mortality rate, as mild cases of MERS-CoV may be missed by existing surveillance systems and the case fatality rates are counted only amongst the laboratory-confirmed cases.

Humans are infected with MERS-CoV from direct or indirect contact with dromedaries who are the natural host and zoonotic source of MERS-CoV infection. MERS-CoV has demonstrated the ability to transmit between humans but it has, so far, mainly occurred in health care settings and to a limited extent among close contacts.

One of the new reported cases had travel history outside of Qatar and it is likely that the infection was acquired as a result of zoonotic infection from direct or indirect contact with infected dromedary camels. WHO expects that additional cases of MERS-CoV infection will be exported from countries where MERS-CoV is circulating in dromedaries by travelers who may acquire infection after exposure to: 1) infected dromedaries or dromedary products (for example, following contact with camels); or 2) to infected humans (for example, in a health care setting).

The notification of these cases does not change the overall risk assessment. WHO expects that additional cases of MERS-CoV infection will be reported from the Middle East and/or other countries where MERS-CoV is circulating in dromedaries, and that cases will continue to be exported to other countries by individuals who were exposed to the virus through contact with dromedaries or their products (for example, consumption of camel’s raw milk), or in a healthcare setting. WHO continues to monitor the epidemiological situation and conducts risk assessments based on the latest available information.

(Continue . . . )
The 2005 International Health Regulations (IHR) agreement requires that countries develop mandated surveillance and testing systems, and that they report certain disease outbreaks and public health events to WHO in a timely manner. 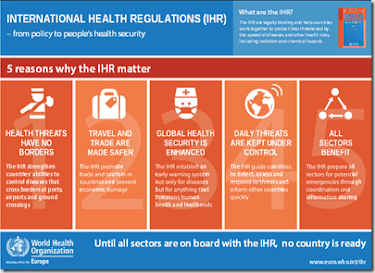 Sadly, after more than 17 years, those lofty goals have yet to be realized by much of the world.   In some cases, countries are still holding crucial information close to the vest for political or economic reasons.

Regardless of the reasons, our ability to see emerging threats before they spiral out of control remains very limited, and that leaves us open to being blindsided by the next global health crisis.

Again.
Posted by Michael Coston at 8:31 AM