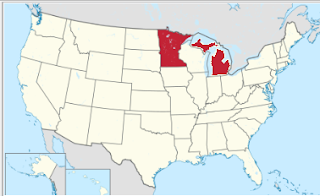 #16,750
While Eurasian HPAI H5Nx viruses remain primarily a threat to wild birds and poultry, over the past couple of years we've been watching its evolution, and apparent increased adaptation, to mammalian hosts.

Unlike with the more dangerous Asian lineage of H5Nx (H5N1/H5N6) viruses - which have sparked epidemic concerns for two decades - until relatively recently the Eurasian lineage had never been known to infect humans.

In early 2021 Russia announced 7 mild human infections with HPAI 5  (all poultry workers), and last December the UK recorded their first H5 infection (also mild).  Just over 2 weeks ago we learned that Colorado was Investigating the 1st Human HPAI H5 Infection In the United States.

Despite these rare, and sporadic cases, the CDC continues to reassure that H5N1 Bird Flu Virus in U.S. Wild Birds and Poultry Poses a Low Risk to the Public.

Over the past year we've seen the `zoonotic' threat of this Eurasian H5 lineage elevated - first by the CDC (see CDC Adds Zoonotic Avian A/H5N8 To IRAT List) - and more recently by the ECDC/EFSA.

We've also been watching increasing reports of HPAI H5 infection spillover into mammalian wildlife, both in Europe and North America.  Of particular concern have been reports of severe, often fatal, neurological manifestations in these infected animals.  Some examples from Europe include:

Just over a week ago Canada reported their first mammalian H5 infection (see Ontario: CWHC Reports HPAI H5 Infection With Severe Neurological Signs In Wild Foxes (Vulpes vulpes), while this week 2 states (Minnesota and Michigan) have reported similar spillovers.
While neurological manifestations have been reported in mammals infected with the Asian Lineage of  H5Nx viruses (see below), this is a relatively new phenomenon with the milder Eurasian Lineage.

In 2015, after the death of the first imported H5N1 case in Canada, we saw a study (see CJ ID & MM: Case Study Of A Neurotropic H5N1 Infection - Canada), where the authors wrote: These reports suggest the H5N1 virus is becoming more neurologically virulent and adapting to mammals. Despite the trend in virulence, the mode of influenza virus transmission remains elusive to date. It is unclear how our patient acquired the H5N1 influenza virus because she did not have any known contact with animals or poultry.
Similarly, in a Scientific Reports open access study on the genetics of the H5N1 clade 2.3.2.1c virus - Highly Pathogenic Avian Influenza A(H5N1) Virus Struck Migratory Birds in China in 2015 – the authors warned: This suggests that the novel Sanmenxia Clade 2.3.2.1c-like H5N1 viruses possesses tropism for the nervous system in several mammal species, and could pose a significant threat to humans if these viruses develop the ability to bind human-type receptors more effectively.

A wild fox from Anoka County has tested positive for highly pathogenic avian influenza. This is the first confirmed case of HPAI in a wild mammal in Minnesota.

The University of Minnesota Veterinary Diagnostic Laboratory alerted the Minnesota Department of Natural Resources, which is responsible for monitoring the health of the state’s wildlife. The National Veterinary Services Laboratory later confirmed the positive test earlier this week.

Last week, two red fox kits in Ontario, Canada tested positive for HPAI. Those kits were the first reported cases of the current HPAI outbreak in a wild mammal in North America. The Minnesota fox also was a kit.

The DNR routinely responds to reports of sick wildlife and conducts testing for many wildlife diseases, including canine distemper and rabies in foxes. In light of these most recent findings of HPAI in fox kits, the DNR will add avian influenza to the routine screening process when foxes exhibiting neurological symptoms are submitted to the Minnesota Veterinary Diagnostic Laboratory.

This year’s HPAI strain is more aggressive and has caused more deaths amongst domestic poultry and wild birds than the previous strain in 2015.

The DNR is coordinating bird sampling efforts with U.S. Department of Agriculture Wildlife Services, the U.S. Fish and Wildlife Service, The Raptor Center, the Wildlife Rehabilitation Center of Minnesota, Wild and Free, and other wildlife rehabilitation centers. The DNR and its partners are still learning about this new HPAI strain and its effects on wildlife. The DNR’s monitoring efforts are designed to learn where the strain is spreading and what species might be affected.

“Wild animals can sometimes transmit diseases to humans, and while we typically think of rabies or other well-known diseases as the primary concerns, this shows that there are other risks to keep in mind as well,” said Dr. Joni Scheftel, state public health veterinarian with the Minnesota Department of Health. “The best advice we have for Minnesotans is to avoid contact with wildlife that appear sick or injured and contact your healthcare provider if you are bitten or have other close contact with wildlife.”

Minnesotans who find sick or dead waterfowl and raptors — which are the wildlife most affected by HPAI — should contact the DNR to file a report. Learn more about what kind of reports the DNR needs for monitoring purposes, its response to the avian influenza outbreak, and contact information on the DNR website.

On Thursday, Michigan's DNR announced their own detection of foxes (from 3 counties) testing positive for HPAI H5.

The DNR had received a report from a wildlife rehabilitator in southeastern Michigan about the fox kits exhibiting neurologic signs of HPAI before death. The kits were observed circling, tremoring and seizing. Two of the three died within hours of intake, while one appeared to respond to supportive therapy but then died in care. Interestingly, an additional kit that was a sibling of the Macomb County kit did survive, but developed blindness, making her non-releasable. This kit will be housed at a local nature center.

Highly pathogenic avian influenza is a virus known to affect birds throughout North America, with detections in backyard flocks and commercial poultry facilities, to date, in 34 states and detections in wild birds in 35 states. HPAI is highly contagious and poultry are especially vulnerable. In addition, this viral strain also affects waterfowl, raptors and scavengers (like turkey vultures, eagles and crows).

In Michigan, HPAI has been confirmed in 69 wild birds, with the outbreak continuing to spread throughout North America. Follow the current status of HPAI in Michigan at Michigan.gov/BirdFlu and Avian influenza updates (Michigan.gov).

The three fox kits were sampled for HPAI at the DNR Wildlife Disease Lab and submitted to the Michigan State University Veterinary Diagnostic Laboratory for testing. All three kits tested “non-negative” (presumptive positive) on May 6 and were confirmed positive by the National Veterinary Services Lab in Ames, Iowa, on May 11. The virus was detected in swabs collected from the nose, mouth, throat and brain tissue of all three kits, and a full postmortem examination was conducted to aid in learning more about this disease in foxes.

The DNR Wildlife Division continues to collaborate with many partners within the state and across agencies to share findings.

The type of exposure (inhalation vs. ingestion) - and the infectious dose - likely makes a difference, as does the host species. What happens to a fox that likely consumed raw, heavily infected meat, isn't necessarily indicative of this virus's threat to humans.

But any change in the host range - or symptoms of infection - of this Eurasian HPAI H5 virus is worthy of our attention.

For more on the recent evolution of the Eurasian HPAI H5 virus, you may wish to revisit: