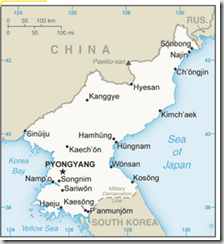 Although official state media continues to describe their recently announced epidemic (see North Korea Orders Lockdown Over 1st Reported COVID Outbreak) as due to an `unidentified fever', most Western analysts assume this to be due to COVID-19.

Details - filtered through the lens of a strictly controlled state-run media - are beginning to emerge, and based on the following English translation from KCNA Watch, this outbreak apparently began in late April and has infected at least 350,000 people.

It is worth noting that North Korea held several large military parades in Pyongyang in mid-April, which may have contributed to the rapid spread of the virus.

Based on past (unconfirmed) reports, there are strong suspicions that this isn't North Korea's first outbreak of COVID - but it does appear to be the largest - and without vaccines, it is likely to spread rapidly through the 26 million people who live there.

While the world has offered COVID vaccines to North Korea in the past, they have always been declined.  Reuters is reporting today that South Korea will offer vaccines, and other medical assistance, to the north again, but it is unknown whether the North will accept.

Date: 13/05/2022 | Source: Pyongyang Times | Read original version at source
Kim Jong Un, general secretary of the Workers' Party of Korea and president of the State Affairs of the Democratic People's Republic of Korea, visited the state emergency epidemic prevention headquarters on May 12.

He was accompanied by Jo Yong Won and Pak Jong Chon, members of the Presidium of the Political Bureau of the WPK Central Committee.

He was greeted by officials of the headquarters on the spot.

A fever whose cause couldn't be identified explosively spread across the country from late April and more than 350 000 people got fever in a short span of time, of whom at least 162 200 have healed completely. On May 12 alone, some 18 000 persons caught fever nationwide and as of now up to 187 800 have been isolated and receiving medical treatment. Six persons died (one of them tested positive for o mutated virus BA.2).

The General Secretary seriously noted that the simultaneous spread of fever with the capital area as the centre shows that there are vulnerable points in the epidemic prevention system we have already established.

He reiterated the importance of the work of all provinces, cities and counties across the country to take steps for isolating all working, production and residential units from each other while locking down their areas and providing their inhabitants with every convenience in curbing the spread of the malignant virus.

Noting that if we follow the spread situation to control and take measures against it in addressing the present crisis, in particular, we will always stand on the defensive in the epidemic prevention work, he said it is the top priority to block the virus spread by actively locking down areas and isolating and treating persons with fever in a responsible manner.

As he repeatedly stressed, the initiative in the epidemic prevention work is the life, he said, underlining the need to immediately and thoroughly carry out the articles of the decisions of the Political Bureau of the Party Central Committee for actively and firmly taking hold of the good chance of winning the epidemic prevention campaign and thus quickly contain the spread of the epidemic.

The public health and emergency epidemic prevention sectors should closely observe the characteristics of the course of diseases of persons with fever, rapidly apply scientific treatment methods and tactics as demanded by the specialized directive and take additional state measures for supplying medicines, he said.

He called for offensively conducting the political information work to contain and stabilize the spread of the virulent infectious disease by strictly adhering to the state emergency epidemic prevention guidelines and make the people have a correct understanding of the state's emergency measures and display a high sense of self-consciousness in implementing them.

It is the most important challenge and supreme tasks facing our Party to reverse the immediate public health crisis at an early date, restore stability in the epidemic prevention and protect the health and wellbeing of our people, he said, clarifying the determination, will and strategy and tactics of the Party Central Committee to victoriously lead the epidemic prevention war.

He expressed the expectations and conviction that the officials of the state emergency epidemic prevention headquarters would perfectly block and terminate the sources of spread of the malignant epidemic and take the lead in making a breakthrough for victory in the great epidemic prevention campaign with tremendous courage and practical ability as demanded by the spirit of the Eighth Political Bureau Meeting of the Eighth Central Committee of the WPK, fully aware of the solemn mission and responsibility and duty assigned by the Party and the revolution.

Posted by Michael Coston at 8:44 AM