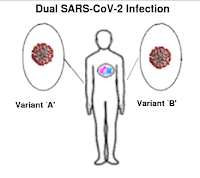 Until earlier this year, recombination was only rarely mentioned in connection with COVID-19, although we'd seen a number of studies (see here, here, and here) suggesting that recombination was helping to drive the evolution of the virus.

Recombination is the sharing of genetic material between similar genomes that simultaneously infect a single host.  The resultant hybrid is called a recombinant.

While recombination has undoubtedly occurred with COVID since the beginning, recombinant viruses  have become easier to identify with the emergence of Omicron, which differs enough genetically from earlier COVID variants (Alpha, Delta, `Wild type') to make Delta/Omicron hybrids stand out.

Last January researchers in Cyprus announced they had detected a recombinant that the media dubbed `Deltacron', but that claim was quickly dismissed as likely due to lab contamination (see Nature news Deltacron: the story of the variant that wasn’t).

But within a couple of months, several other labs had confirmed they were tracking recombinant COVID variants (see UKHSA, ECDC & WHO Now Monitoring Multiple Recombinant COVID Variants (XD, XE & XF)).

Suddenly recombinant COVID variants went from being `plausible' to confirmed, but identifying them remains difficult.

Still, most variants (regardless of how they came about) are destined to be evolutionary failures.  The existing Omicron variants (BA.2.12.1, BA.4, BA.5, etc) are already so well adapted to humans, and so transmissible, that they would overwhelm most emerging competitors.

That doesn't preclude the possibility of a new, more dangerous, variant emerging. But it does set the bar higher for any heir apparent to thrive.

All of which brings us to the following EID Journal Dispatch, describing the identification of SARS-CoV-2 Delta-Omicron viruses detected in the United States. I've only reproduced some excerpts from a longer report. Follow the link to read it in its entirety. I'll have a postscript when you return.

Emerging variants of SARS-CoV-2 are characterized and monitored closely by national genomic surveillance. In addition to sequencing efforts from US public health, academic, and commercial laboratories, the Centers for Disease Control and Prevention (CDC) collects and sequences SARS-CoV-2 specimens from 64 partners across state, tribal, local, and territorial public health agencies through the National SARS-CoV-2 Strain Surveillance program (https://www.cdc.gov/coronavirus/2019-ncov/variants/cdc-role-surveillance.html) and funds SARS-CoV-2 sequencing through a nationwide network of commercial laboratory testing companies. To date, these efforts have contributed 1.8 million SARS-CoV-2 genomes from the United States to public repositories. The purpose of this genomic surveillance system is to detect and respond dynamically to new and changing SARS-CoV-2 variants (1).

Recombination is an evolutionary mechanism frequently observed in coronaviruses (2,3), and it can lead to rapid accumulation of mutations and heightened transmissibility (4). SARS-CoV-2 recombination events have also been found to arise disproportionately in the spike gene (Y. Turkahia et al., unpub. data, https://www.biorxiv.org/content/10.1101/2021.08.04.455157V1External Link). Recombination between Alpha and Delta SARS-CoV-2 variants has been documented (5–7).

Given the divergence of the Delta and Omicron variant genomes, as well as the known immune-escape properties of Omicron (8,9), a Delta–Omicron recombinant strain could alter the landscape of vaccine and therapeutic effectiveness. In early 2022, viruses resulting from recombination between Delta and Omicron were reported, but further inspection indicated that these claims seemed to have resulted from laboratory artifact or co-infections (10). With this study, we identified candidate Delta–Omicron recombinant genomes from the CDC national genomic surveillance and attempted to rule out laboratory contamination or sequencing error.

Our results provide evidence of a recombinant SARS-CoV-2 genome containing a hybrid spike protein derived from a Delta (AY.119.2)–Omicron (BA.1.1) recombination event. However, the ability to effectively identify and confirm additional recombinant viruses remains challenging because of the range of sequence quality available in the public domain. These limitations are a result of amplification inefficiency and consensus-calling algorithmic error, as well as cases of co-infection or potential sample contamination.

Comparative phenotypic characterization of virus isolates from the recombinant cluster was not possible because all specimens were chemically inactivated. In the spike protein, there are no additional amino acid substitutions within the receptor-binding domain compared with BA.1.1 (Omicron) lineage viruses. Despite recombinant viruses with a hybrid spike protein having been detected over the course of 6 weeks, the number of resulting cases remains low. Most cases were identified within the mid-Atlantic region of the United States. However, epidemiologic linkage cannot be determined because CDC does not collect identifying information for these samples.

Systematic virus surveillance is essential for long-term monitoring of SARS-CoV-2 evolution. Given the potential public health consequences of new variants emerging from recombination, investigations involving laboratory and bioinformatic components, such as the one presented here, are critical for correctly identifying and tracking these viruses.

With SARS-CoV-2 increasingly jumping species (see WHO/FAO/OIE Joint Statement On Monitoring SARS-CoV-2 In Wildlife & Preventing Formation of Reservoirs), recombination with other coronaviruses is also considered a possibility (see The Recombination Potential between SARS-CoV-2 and MERS-CoV from Cross-Species Spill-over Infections).

We saw the potential impact of COVID recombination events discussed last summer in UK SAGE: Can We Predict the Limits of SARS-CoV-2 Variants and their Phenotypic Consequences?, where that expert panel envisioned a number of possible scenarios.
But the reality is - because of its ability to continually reinvent itself - the future evolution and impact of COVID remains highly unpredictable.  Which means that we need to remain nimble enough in our response to be able to pivot if needed.
Posted by Michael Coston at 7:48 AM