Although it is not getting the same level of attention that COVID, or even Monkeypox, have received from  the media, the world is embroiled in its largest expansion of HPAI (Highly Pathogenic Avian Influenza) H5Nx clade 2.3.4.4b in wild and domesticated birds in history.

While primarily a concern for poultry producers, spillovers into non-avian hosts are becoming more common and a handful of mild human infections have been reported, raising concerns that this previously mild lineage of avian flu could one day become a bigger public health hazard.

The rapid spread of HPAI from farm-to-farm, and sometimes to persons without direct contact with infected birds, has led to speculation that virus-contaminated dust particles might be carried relatively long distances, spreading the infection.

While controversial, it is not a new idea. Several times over the past decade we've explored the world of aerobiology; the study of how bacteria, fungal spores, pollen and even viruses can be passively transported in the air.

In 2010 (see Viruses Blowin’ In The Wind?)  we saw a report in the journal Environmental Health Perspectives, that suggested that it was possible for H5N1 (or any Influenza A virus) to be transported across long (hundreds of kilometers) distances in the air.

Although researchers demonstrated influenza RNA could be detected in ambient air samplings, they didn’t establish that the virus remained viable over long distances.

Again in 2010, in a blog called Of Ducks, And Feathers, And H5N1 we looked at a study that determined that the H5N1 virus may persist on the dropped feathers from infected ducks for weeks and even months, and that they may help spread the virus in the environment.

In December of 2012 (see Barnstorming Avian Flu Viruses?) we looked at a study in the Journal of Infectious Diseases called Genetic data provide evidence for wind-mediated transmission of highly pathogenic avian influenza that found patterns that suggested farm-to-farm spread of the 2003 H7N7 in the Netherlands due to the prevailing wind.

Another study of the same outbreak, Modelling the Wind-Borne Spread of Highly Pathogenic Avian Influenza Virus between Farms (PloS One 2012), found that wind borne transmission could have accounted for up to 24% of the transmission over distances up to 25 km.

During the 2014-15 avian epizootic in the United States, airborne spread between farms miles apart was considered possible, although never conclusively proven see APHIS: Partial Epidemiology Report On HPAI H5 In The US) . 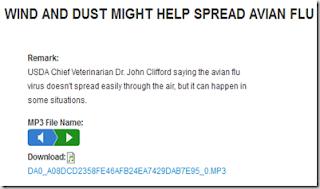 In Asia we've seen numerous instances where the `dust’ (desiccated chicken manure, feathers, etc.) from chicken farms has been strongly suspected of having spread bird flu – at least for a distance of several hundred yards, perhaps farther.

For some human bird flu cases in Indonesia and China, their only known exposure has been listed as living near, or simply walking past, a poultry farm or live market.

Chickens generate a lot of dust, and with large exhaust fans used to cool down crowded poultry houses, the airborne spread of viruses across moderate distances (1km-25km) on dust particles is something we have to take seriously.

All of which brings us to a new study, published yesterday in the CDC's EID Journal, which presents evidence of virus-contaminated dust on and around poultry farms, and suggests sampling the dust - instead of swabbing birds - may be a more effective way to detect avian influenza outbreaks.

First the abstract, and some excerpts from the study, after which I'll return with a bit more.

Avian influenza A(H5N8) virus has caused major epizootics in Europe since 2016. We conducted virologic analysis of aerosol and dust collected on poultry farms in France during 2020–2021. Our results suggest dust contributes to viral dispersal, even early in an outbreak, and could be a valuable surveillance tool.

During winter 2020–21, the HPAI H5N8 virus belonging to the A/goose/Guangdong/1/1996 clade 2.3.4.4b lineage caused hundreds of outbreaks among wild and domestic flocks across Europe (2,3). France was severely affected; 492 poultry farms, primarily duck farms, were infected during December 5, 2020–May 3, 2021. Despite reinforced surveillance activities, the virus spread rapidly, posing major challenges for surveillance and control. Officially recognized surveillance methods involve tracheal or cloacal swab-based sampling (4,5). However, these methods are laborious and have technical requirements that make application on such a massive scale difficult; thus, newer surveillance methods are needed.

Epidemiologic modeling of this outbreak suggested within-farm viral transmission was extremely fast, and the environment was a major source of contamination for neighboring farms (6). HPAI viruses disperse in aerosols, in fomites carried by human and animal vectors, and via feathers, fecal particles, and to a great extent, dust (7–9). Poultry farms are known to heavily generate dust particles that spread from feed, litter, feces, and animal skin and feathers (9,10). These particles can act as vehicles for bacteria and viruses and are classified, depending on their size, as inhalable (<100 µm), thoracic (<10 µm), or respirable (<4 µm) (10). In poultry houses, most dust consists of nonrespirable particles >4 µm (10). We evaluated the role of dust as a vehicle of H5N8 clade 2.3.4.4b virus and assessed whether dust or aerosol sampling is a viable alternative to bird swab sampling for HPAI virus surveillance.

We used field conditions to evaluate whether dust from poultry farms contained HPAI viruses and to compare surface dust and aerosol testing for HPAI virus against official swab-based methods. We used wipe tests to collect surface dust and 2 bioaerosol devices to collect aerosol samples during the 2020–21 HPAI H5N8 virus epizootic outbreak in France. Standard molecular analysis detected high viral RNA loads in the early phase of flock infection, before clinical signs appeared. In addition, size fractioning of aerosol samples revealed that high RNA viral loads and infectious viral particles were associated with the largest particles (>1 µm), which are easy to collect and use for molecular analysis. However, the field conditions we used cannot be reproduced in experimental animal trials because of ethical and biosecurity requirements, which result in dramatically lower dust loads than those found in the field.

Recent research on influenza transmission routes revealed that nonrespiratory airborne particles are more likely to cause infection than are droplets or fomites (7). Infectious aerosols generated from inert objects handled by humans or dispersed through animal movements can lead to further infection. Dust can carry infectious particles and is omnipresent in poultry houses (10) and so could be a major means of viral transmission and dispersal in the environment. These findings suggest that biosecurity protocols should strongly emphasize limiting the amount of dust dispersed via farm equipment to reduce the spread of HPAI viruses.

Of note, for early detection, before flock animals show clinical signs of illness, we found that surface dust sampling using wipe tests and aerosol sampling using a high flow rate collection device are more sensitive than tracheal swab samples. The higher sensitivity of environmental sampling methods for early detection is likely because of infection dynamics at the flock level. During the early phases of infection, only a few animals are infectious, making the probability of detecting virus during individual swab-based sampling low (6). Swab sampling also is time consuming, labor-intensive, and expensive, whereas dust wiping is inexpensive, fast, easy to perform, and noninvasive.

In conclusion, we detected HPAI H5N8 clade 2.3.4.4b virus in dust samples from poultry farms during a large epizootic in France. Our findings suggest dust wipe samples are an efficient surveillance tool and could enable more rapid virus detection and implementation of measures to curb virus spread.

Mr. Filaire is an engineer in biosciences and a PhD candidate in a collaborative project between the Host-Pathogen Interactions Joint Research Unit, National Veterinary School and INRAe, Toulouse, France; EIP Purpan, Toulouse; and Theseo, Lanxess Group, Laval, France. His research focus is on innovative methods for detection and characterization of emerging viruses.

Conventional wisdom holds that influenza viruses can only travel a short distance in the air, are quickly deactivated by desiccation and/or UV rays from the sun, and that they aren't truly `airborne'.

But we continue to see evidence that - under the right conditions - influenza viruses can can be incredibly hardy (see Proc. Royal Society B: Influenza A Viruses Remain Viable For Months In Northern Wetlands - USGS).

While the focus of most of these reports has been avian influenza, last November in EID Journal: Reassortant Influenza A(H1N1)pdm09 Virus in Elderly Woman, Denmark, January 2021, we looked Denmark's 1st confirmed swine variant infection of a human.

This report was notable because the patient (who had multiple comorbidities) was in a pandemic lockdown at the time of her infection, had very little outside contact, and was one of only 46 confirmed flu cases in Denmark during the 2020-2021 flu season.

Exactly how she came to be infected with a novel swine variant virus under those conditions isn't clear, but the authors did dangle a tantalizing possibility; she lived roughly 2 km from a pig farm, and her ". . . residence was downwind of the pig herd most days preceding clinical symptoms."

An anecdotal report, to be sure.  And even if true, it might be a million-to-one shot.

While the goal of most agricultural biosecurity protocols is to create barriers to keep viruses out of the farm, we may soon discover that it is equally important to keep viruses from leaving as well.