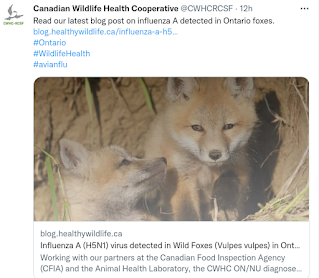 Unlike with the more dangerous Asian lineage of H5Nx (H5N1/H5N6) viruses, all known human infections with the Eurasian HPAI H5 virus have been mild.

That said, all viruses continue to mutate and evolve, and over the past 18 months we've seen some evidence to suggest that this Eurasian H5N1 (and related H5Nx viruses) may be moving towards becoming a more `mammalian adapted' subtype.

In early 2021 Russia announced 7 infections among poultry workers, which convinced the CDC To Add Zoonotic Avian A/H5N8 To Their IRAT List last May.  Last December the  ECDC/EFSA Raised the Zoonotic Risk Potential Of Avian H5Nx, following the detection of a human infection in the UK.

At the same time we've seen reports (see below) from the UK and Europe of sporadic mammalian infection with HPAI H5Nx, often involving serious neurological manifestations such as walking in circles, falling over, and blindness:

Manifestations that have previously been reported with some Asian H5N1 viruses (see below), but not with the milder Eurasian lineages

These reports suggest the H5N1 virus is becoming more neurologically virulent and adapting to mammals. Despite the trend in virulence, the mode of influenza virus transmission remains elusive to date. It is unclear how our patient acquired the H5N1 influenza virus because she did not have any known contact with animals or poultry.

Working with our partners at the Canadian Food Inspection Agency (CFIA) and the Animal Health Laboratory, the CWHC ON/NU diagnosed influenza A (H5N1) in 2 wild fox kits in Ontario, on May 2, 2022. These cases represent the first detections of highly pathogenic avian influenza virus (HPAIV) H5N1 A/goose/Guangdong/1996 (Gs/GD) lineage in wild mammals in Ontario, Canada and in the Americas.

The fox kits were found together in St. Marys, Ontario and submitted from a wildlife rehabilitation centre. One of the kits was found dead and the other was exhibiting severe neurological signs (including seizures) and died shortly after admission to a wildlife rehabilitation centre. Based on clinical signs, post-mortem/microscopic examination, and the detection of influenza A (H5N1) virus in brain tissue, it is likely that influenza A (H5N1) virus was the cause of mortality for these foxes.

The type of exposure (inhalation vs. ingestion) - and the infectious dose - likely makes a difference, as does the host species. What happens with a fox that likely consumed raw, heavily infected meat, may not tell us very much about someone who is exposed to infected poultry.

Despite two decades of concern, and hundreds of human infections (mostly from the Asian lineage), H5Nx has failed to adapt well enough to humans to pose a serious global health threat.  And in truth, it may never happen (or it could happen tomorrow).

For now, the evidence suggests that the Eurasian HPAI H5 viruses circulating in Europe and North America pose a very low risk to human health.

That said, avian influenza viruses are incredibly unpredictable, and so we'll continue to watch closely for any further signs of mammalian adaptation.
Posted by Michael Coston at 8:34 AM