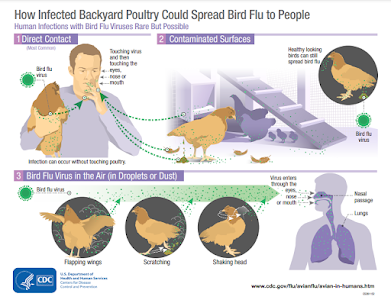 #16,720
For the past 3 months the United States (and Canada) have been dealing with an H5N1 epizootic in poultry and wild birds, and while this virus has been primarily a disease of birds, the CDC has warned:

Overnight the state of Colorado (and the CDC via Email) have verified that 1 person with direct contact with poultry has been diagnosed with a probable - and apparently mild - H5N1 infection.   This comes roughly 4 months after a similar case was reported from the UK (see UKHSA Statement On Human H5 Infection In England).

It should be noted that while it bears the same name (H5N1) as its far-more pathogenic Asian counterpart, the European lineage which is impacting Europe and North America has never been linked to severe human infection.

In early 2021 Russia announced 7 mild cases of H5Nx infection, and in late December  the ECDC/EFSA Raised the Zoonotic Risk Potential Of Avian H5Nx.

All of which brings us to the statement (below) by the State of Colorado DOH on the first U.S. infection with this H5N1 virus.

Person had direct contact with infected poultry; public health experts say the risk to the public is low.

April 28, 2022—The Colorado Department of Public Health and Environment has been monitoring and testing people exposed to poultry and wild birds infected with avian flu (Highly Pathogenic Avian Influenza, HPAI), also known as H5N1 flu. Earlier this week, a test revealed the presence of the influenza A (H5) virus in a single nasal specimen from a person who was working on a farm with infected poultry. CDC confirmed the result on April 27, 2022. Repeat testing on the person was negative for influenza. Because the person was in close contact with infected poultry, the virus may have been present in the person’s nose without causing infection.

The adult male, who is younger than 40, is largely asymptomatic, reporting only fatigue. He is now isolating and receiving the influenza antiviral drug oseltamivir (tamiflu) per CDC guidance. Scientists believe that the risk to people is low as H5 flu viruses spread among wild birds and poultry. They do not normally infect humans nor spread from person to person. There are currently no known cases of this H5 flu virus spreading among people. There are no other confirmed human cases in Colorado or the United States at this time.

This positive result is due to direct exposure to infected poultry at a commercial farm in Montrose County. The person, who is an inmate at a state correctional facility in Delta County, was working with poultry as part of a pre-release employment program where participants have the opportunity to work for private employers and be paid a prevailing wage. The affected flock has been euthanized and disposed of under the guidance of the USDA and CDA. All members of the response team, including other inmate workers, were provided personal protective equipment while working on the farm.

“We want to reassure Coloradans that the risk to them is low,” said Dr. Rachel Herlihy, state epidemiologist, Colorado Department of Public Health and Environment. “I am grateful for the seamless collaboration between CDC, Department of Corrections, Department of Agriculture, and CDPHE, as we continue to monitor this virus and protect all Coloradans.”

While human infections of the H5 viruses are rare, direct exposure to infected birds increases that risk. Infected birds shed flu viruses in their saliva, mucous, and feces. Public health officials in the United Kingdom confirmed H5N1 virus in January 2022 in a person who was asymptomatic and had direct contact with infected birds.

People should avoid contact with poultry that appear ill or are dead, and avoid contact with surfaces that appear to be contaminated with feces from wild or domestic birds. If you must handle sick or dead poultry, wear gloves and wash your hands with soap and water afterwards. If possible, wear respiratory protection such as a medical facemask and eye protection such as goggles. CDC also has guidance for specific groups of people with exposure to poultry, including poultry workers and people responding to poultry outbreaks. CDC will continue to provide further updates to the situation and update guidance as needed.

It is safe to eat properly handled and cooked poultry and poultry products in the United States. The proper handling and cooking of poultry and eggs to an internal temperature of 165˚F kills bacteria and viruses, including H5N1 viruses.

What flock owners can do
HPAI is a highly contagious and deadly foreign animal disease in domestic poultry. Wild birds serve as a reservoir for influenza viruses and can spread these viruses to poultry. Certain strains of avian influenza are also zoonotic. USDA has published all detections of HPAI in poultry and wild birds on the APHIS website. Learn more about avian influenza and how to report unusual bird deaths on the CDA website at ag.colorado.gov/hpai.

INCREASE BIOSECURITY: It is extremely important for poultry owners to increase biosecurity measures to protect their birds. The USDA Defend the Flock website has helpful resources for keeping poultry healthy in any operation. Commercial poultry producers can use this toolkit to assess their biosecurity practices and preparedness.

REPORT DISEASE: It is important for veterinarians and producers to report any suspicious disease events in poultry flocks to the State Veterinarian’s office at 303-869-9130. If it is after hours, the voicemail message will indicate which veterinarian is on call.

If you have sick birds or birds that have died from unknown causes, help is available at the Colorado Avian Health Call Line at Colorado State University Their number is 970-297-4008.

SECURE FOOD SUPPLY: The Colorado Department of Agriculture strongly encourages poultry producers to enroll as a Secure Food Supply participant through their office. The most important component of ensuring your continuity of business in an outbreak is to enroll in Secure Food Supply and have a biosecurity plan in place. If you would like more information, contact dave.dice@state.co.us or 303-263-2407.

Although the CDC has not yet posted a notice on their website, or updated their HPAI H5 status page (below), they did send out an emailed statement overnight, which you can view on FluTrackers.  I've excerpted the following snippet:

This one H5-positive human case does not change the human health risk assessment. CDC will continue to watch this situation closely for signs that the risk to human health has changed. Signals that could raise the public health risk might include multiple reports of H5N1 virus infections in people from exposure to birds, or identification of spread from one infected person to a close contact. CDC also is monitoring H5N1 viruses for genetic changes that have been associated with adaptation to mammals, which could indicate the virus is adapting to spread more readily from birds to people. CDC is taking routine preparedness and prevention measures, which includes an existing candidate vaccine virus that could be used to make vaccine for people if one were needed.

While this story is likely to get a lot of attention today, and over the weekend, this case is not unexpected, and we will likely see more in the future. In its current incarnation, H5N1 is unlikely to pose much of a threat to public health.

But H5Nx continues to mutate, and what we can say about its threat today may not hold true tomorrow.

In May of 2021,  in  Science: Emerging H5N8 Avian Influenza Viruses, we looked at a review by two well-respected Chinese scientists (Weifeng Shi and George F. Gao)  on the evolution, and growing zoonotic threat, of avian H5N8, stating:
And in June 2021, in V. Evolution: Genomic Evolution, Transmission Dynamics, and Pathogenicity of Avian H5N8 Viruses Emerging in China, 2020, we saw Chinese researchers describe the rapid rise in 2020 of an antigenically distinct H5N8 virus that is lethal to chickens and mice, that is similar to the Russian Zoonotic strain, and has shown signs of mammalian adaptation.
For now, the zoonotic potential of these European H5Nx viruses remains quite limited, but they need to be monitored closely for any signs that might be changing.
Posted by Michael Coston at 6:01 AM