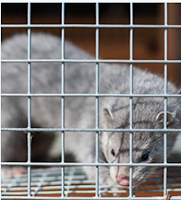 
#17,078
Almost exactly 13 years ago, in 2009's That Touch Of Mink Flu, we looked at a report out of Denmark, where at least 11 mink farms in the Holstebro were reported to be infected with a variant of the human H3N2 virus.

Three years earlier (2006) CIDRAP reported on a European mink found infected with an aggressive form of the H5 flu virus in southern Sweden. While in 1984 a large outbreak in Swedish mink farms was found to be due to the H10N4 avian virus.

Since 2009 we've seen outbreaks of avian H9N2, the detection of Swine EA H1N1 influenza, and numerous outbreaks of COVID (see here, here, and here) in farmed mink (including transmission to humans).

Mink are a member of the Mustelidae family of carnivorous mammals, which also includes otters, badgers, weasel, martens, ferrets, and wolverines. Many of these species are susceptible to flu viruses – most notably ferrets – which are often used in influenza research.

While COVID has garnered most of our attention the past three years, since late 2020 we've also been watching the evolution, geographic spread, and occasional spillover of avian H5Nx to mammals.

Although only 3 human infections have been reported, earlier this year the CDC classified the virus as zoonotic (see CDC Adds Zoonotic Avian A/H5N1 Clade 2.3.4.4b To IRAT List).

Formerly considered only a threat to poultry and wild birds, HPAI H5N1 clade 2.3.4.4b viruses have evolved to become better suited for carriage by migratory birds, have increased their avian host range (see DEFRA: The Unprecedented `Order Shift' In Wild Bird H5N1 Positives In Europe & The UK), and have shown a greater affinity for infecting mammals (see partial list below).

Canada: First Detection Of H5N1 In A Black Bear

Sweden: First Known Infection of A Porpoise With Avian H5N1

To this growing list we can add a report out of Spain this week describing the spillover of avian H5N1 into thousands of farmed mink, and the order to cull these animals for public safety reasons.
This (translated) report from the Xunta de Galicia

Santiago de Compostela, October 18, 2022
The Xunta de Galicia has detected an outbreak of avian influenza A (H5N1) in a mink farm located in the province of A Coruña. This subtype of virus is the one that has been detected in the cases of avian influenza registered in Spain in the last year, both in domestic birds and in wild birds.

The case was detected after the appearance on the farm of sick animals with respiratory symptoms, as well as an abnormal increase in mortality there, so samples were taken for the diagnosis of several diseases, including the disease caused by the Sars-Cov-2 virus, as well like the flu As a result of these analyses, two positive cases of influenza A (H5N1) were detected, which were immediately reported to the Public Health authorities.

After receiving the results, the farm - which has 8,369 breeding females and 43,617 weaned calves - was immobilized by the official veterinary services of the Rural Environment Department, determining the ban on the entry and exit of animals and other materials that could carry the virus and the census of the animals present. The entry and exit of external vehicles and people unrelated to the farm was also restricted, in addition to the reinforcement of all biosecurity and cleaning and disinfection measures, as well as the adoption of measures to minimize contact with the farm staff with the minks Likewise, the corresponding survey was carried out to carry out the appropriate epidemiological studies.

As it is a case of public health, the risk assessment carried out in coordination between the Ministries of Health and the Rural Environment led to the Xunta de Galicia deciding to resolve the slaughter of the animals and the elimination of possible farm materials that could constitute a source of contagion, as well as the rigorous cleaning and disinfection of the farm after its depopulation.

On the other hand, although there is no specific regulation on the actions to be taken in the event of the appearance of the influenza virus in mink farms, the Ministry of the Rural Environment has initiated surveillance actions in the existing poultry and mink farms around the outbreak , with in order to detect the existence of another affected farm, as well as to establish confinement measures in the case of birds and to reinforce biosecurity measures. Likewise, the holding of bird gatherings and the release of hunting birds for repopulation will be prohibited in the area.

Spillovers into farmed animals are considered particularly worrisome, because they allow for serial transmission across a large number of hosts, which may result in host adaptation. 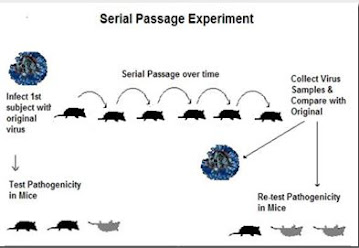 Despite 3 known (mild) human infections, the health threat to the general public from these viruses remains very low, and it is mainly of concern to those who work closely with poultry.

Earlier this month, however we saw the release of ECDC Guidance For Testing & Identification Of Zoonotic Influenza Infections In Humans In The EU/EAA, while CDC Guidance can be found HERE.

To date, all known human influenza pandemics have involved only H1, H2, and H3 viruses, and there is some debate over whether an H5 virus can actually join that exclusive club.

But the same skepticism abounded about novel coronaviruses not so many years ago.

Posted by Michael Coston at 8:15 AM