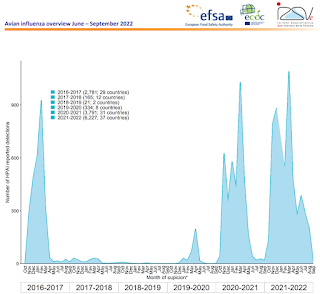 #17,037
Oct 1st begins the 2022-2023 flu season, and as the chart above illustrates, the last 12 months have produced Europe's worst avian flu outbreak on record. Unlike in previous outbreak years, summer offered little respite and we've seen increasing evidence of mammalian adaptation of these viruses (see here, here, and here), making EU officials quite concerned over what the next 12 months will bring.

While the immediate concern is HPAI H5Nx clade 2.3.4.4b, which has ravaged wild birds and poultry both in Europe and North America, we are also watching zoonotic H5N6, H9N2, H10N3, and H3N8 avian viruses (along with a similar number of swine variant viruses).

The 2021–2022 highly pathogenic avian influenza (HPAI) epidemic season is the largest HPAI epidemic so far observed in Europe, with a total of 2,467 outbreaks in poultry, 47.7 million birds culled in the affected establishments, 187 outbreaks in captive birds, and 3,573 HPAI virus detections in wild birds with an unprecedent geographical extent reaching from Svalbard islands to South Portugal and Ukraine, affecting 37 European countries.

This resulted in an unprecedentedly high level of HPAI virus detections in wild birds between June and August 2022 and represents an ongoing risk of infection for domestic birds. HPAI outbreaks were still observed in poultry from June to September with five-fold more infected premises than observed during the same period in 2021 and mostly distributed along the Atlantic coast.

Response options to this new epidemiological situation include the definition and rapid implementation of suitable and sustainable HPAI mitigation strategies such as appropriate biosecurity measures and surveillance strategies for early detection in the different poultry production systems.

The viruses currently circulating in Europe belong to clade 2.3.4.4b with seven genotypes, three of which identified for the first time during this time period, being detected during summer. HPAI A(H5) viruses were also detected in wild mammal species in Europe and North America and showed genetic markers of adaptation to replication in mammals.

Since the last report, two A(H5N6), two A(H9N2) and one A(H10N3) human infections were reported in China. The risk of infection is assessed as low for the general population in the EU/EEA, and low to medium for occupationally exposed people.

While primarily a threat to wild and domesticated birds, these viruses are continually evolving, and in the past few years we've seen disturbing evidence of increased spillover from birds to mammals, with many of these infections resulting in severe neurological manifestations and death (see below)

Today the ECDC has released guidance a 32-page guidance document on testing and detection of zoonotic influenza viruses in humans. Although human infections with these zoonotic flu strains have been sporadic, and human-to-human transmission has only rarely been reported, the number of threats has grown in recent years raising concerns around the world. 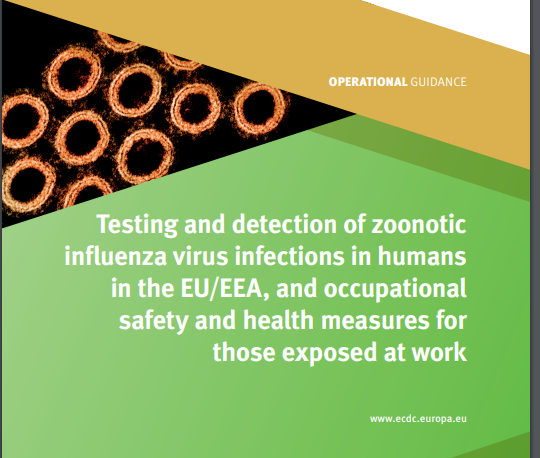 Many of my readers will want to download and read the full report, but I've the press release and executive summary below. I'll have a postscript after the break.

Testing and detection of zoonotic influenza virus infections in humans in the EU/EEA, and occupational safety and health measures for those exposed at work
Guidance
3 Oct 2022

Zoonotic influenza viruses remain a concern for human health in Europe. Influenza viruses circulating in animal species can sporadically be transmitted to humans, causing mild to very severe disease. These viruses have the potential to cause pandemics, such as the 2009 influenza pandemic caused by a triple-reassorted virus spreading from pigs to human, or to severely affect public health, such as during the epidemics of H5N1 in Egypt or H7N9 in China [1].

Viral evolutionary processes, such as reassortment events in influenza viruses, are driving factors for the emergence of new viruses with pandemic potential. The rapid identification of animal influenza viruses being transmitted from animal species to humans and between humans is the key to implementing control and follow-up measures as early as possible. The monitoring of influenza viruses in animal and human populations provides baseline information for any epidemiological situation assessment.

Given the ongoing widespread circulation, evolution and reassortment of influenza viruses in mainly pig and avian populations in Europe and globally, and the threat of increasing transmissibility to mammals including humans, this document aims to provide guidance for public health and laboratory experts in identifying human infections with animal influenza viruses as early as possible to provide early warning and inform risk assessments and public health measures. Regular quarterly reports on the European and global situation concerning avian influenza, together with monthly updates on zoonotic influenza in the Communicable Disease Threats Reports (CDTR), contribute to situational awareness and early warning [2,3].

There are groups of people with occupations that may expose them to animals with possible or confirmed zoonotic influenza virus infection. If people have been exposed to animals that may be infected, and if they present with respiratory symptoms or conjunctivitis, they should be tested. Similarly, patients with a severe acute respiratory disease of unknown aetiology, including those testing positive with an influenza virus that cannot be sub-typed, and severely ill patients with prior animal exposure should be considered for zoonotic influenza virus testing.

Recent findings of encephalitis/meningoencephalitis with high viral loads in the brain samples of mammals (seals, foxes, porpoises, dolphins, black bears, etc.) infected with A(H5N1) or A(H5N8) viruses suggest the possibility of avian influenza infection in patients presenting with atypical symptoms such as encephalitis, neurological affection and unclear aetiology.
Testing and detection of zoonotic influenza can be carried out with polymerase chain reaction assays, enabling a highly sensitive and rapid direct molecular detection of zoonotic influenza viral genomes. The approach to diagnosis using real-time RT-PCR adopted in most laboratories is based primarily on targeting the M1 matrix gene, which is a standard target for the differentiation of type A and type B influenza viruses. Since genetic sequences differ among various subtypes of zoonotic influenza viruses, it is necessary to obtain or design PCR primers and probes that will specifically detect the influenza subtype of interest.

Serological tests should not be used for initial detection and characterisation of a potential zoonotic event. However, serological methods include simple and inexpensive techniques utilising standard laboratory equipment that can identify zoonotic influenza virus subtypes and measure HA-specific antibodies to the virus to answer different questions related to previous exposure or prevalence in specific populations. Nevertheless, serological tests have several limitations that need to be considered, such as the fact that cross-reactions can occur between different lineages within one subtype, or even among different subtypes. Moreover, the results obtained only provide information on historical exposure to zoonotic influenza viruses and do not provide viral genetic information which is vital for evaluating the potential pandemic threat of strains.

Due to the broad diversity of zoonotic influenza viruses, surveillance by genomic evaluation has become indispensable. The nucleotide-level resolution of in-depth whole genome sequencing permits phylogenetic analysis and molecular epidemiological studies for a detailed understanding of an outbreak. Countries with capacity and resources available should use whole-genome sequencing to identify emerging zoonotic influenza viruses. Sequencing is the most robust method for distinguishing between zoonotic and seasonal strains. The availability and increasing use of whole genome sequencing for routine diagnostics can support the identification of zoonotic transmission events and laboratories are strongly encouraged to apply these methods when influenza viruses cannot be typed or subtyped using the classical methods. Phenotypic tests (e.g. airborne transmission capacity in mammals) on viruses with genetic characteristics indicating zoonotic potential should also be performed in laboratories with an adequate level of biosafety (BSL-3 or higher).

Since transmission is likely in workplaces where animal contact cannot be avoided and workers will probably be at the forefront of outbreaks, occupational safety and health measures should be taken at such premises and enhanced at those where occupational cases have been identified.

There is a comprehensive body of legislation defining the obligations of employers and framing the measures to be taken. Employers should periodically revise their workplace risk assessment and ensure that all necessary technical, organisational, maintenance and hygiene measures are taken to prevent the infection of workers. These measures include the avoidance of aerosol and dust, ventilation, separation of work and personal clothing, and measures to prevent contamination of worker accommodation. Employers must keep a record of any workers that may have been exposed to the viruses and offer health surveillance as appropriate. The workplaces concerned include animal breeding centres, farms, zoos and slaughterhouses, however workers in laboratories, healthcare facilities and waste management could also be exposed.

Preparedness plans covering zoonotic influenza updates and regular training courses are important measures, and simulation exercises in a One Health context also make it possible to test readiness. Public health professionals and clinicians should be aware of the need to test for zoonotic influenza virus infection in patients with respiratory illnesses and recent exposure to animals potentially infected with influenza virus, and to perform virus characterisation or whole genome sequencing of severe cases. This is vital for identifying transmission events, initiating follow-up investigations and detecting human-to-human spread. Recent data from infected mammals identified the highest viral load in brain samples which indicates that exposed humans could present with non-respiratory atypical symptoms, such as encephalitis/meningoencephalitis.

While we've seen guidance documents before on zoonotic flu from the ECDC (and the CDC), the level of concern in this document is clearly elevated going into this new flu season.

Granted, it is far from certain that an H5 virus can spark a human pandemic (see Are Influenza Pandemic Viruses Members Of An Exclusive Club?). However, the same could have been said about a coronavirus only a few years ago.  And it is not as if H5Nx is the only novel threat before us.

Admittedly, we've stood on the viral precipice before with Asian H5N1 (primarily in Indonesia and Egypt), and H7N9 (in China), and each time the threat has receded. Maybe we get lucky again.

But I can't recall any time in the past 17 years of writing this blog where we've had so many plausible zoonotic threats circulating simultaneously - and as widely distributed - around the world.

Complicating matters, surveillance and the reporting of novel disease outbreaks from many countries have - for a variety of reasons - become less robust in recent years, essentially leaving us Flying Blind In the Age Of Pandemics & Emerging Infectious Diseases.

It may turn out that none of the current crop of viral threats has the `right stuff' to start a pandemic; that we have years before we must face another serious challenge. But somewhere out there - in a bird, a pig, or a bat - are the makings of the next pandemic virus.

And if COVID taught us anything, it is that we'd better be ready for it when it comes.