We can add Hong Kong to the growing list of countries where the novel H1N1 virus has been detected in pigs.  This time, however, the virus was found in pork samples taken at a slaughterhouse – not in a living pig.

The press release below, from the Hong Kong government, stresses the safety of consuming fully cooked pork products – a point that the pork industry would like to see emphasized.

And while that would appear to be true, that isn’t our primary concern when it comes to infected pigs.   But  more on that in a minute.

The University of Hong Kong (HKU) had found in its regular influenza virus surveillance programme that two pig samples taken at the Sheung Shui Slaughterhouse on October 22 tested positive for human swine influenza (pandemic influenza A H1N1) virus, a spokesman for the Food and Health Bureau said today (November 5).

Experts in charge of the surveillance programme considered that these findings indicate that the human swine flu virus detected in pigs is recently transmitted from humans to pigs.  The risk of humans contracting human swine influenza virus has not increased.


"The findings echo similar reports in other countries," the spokesman said.

"There is no cause for the public to be overly concerned.  Human swine flu virus is killed under a temperature of 70 degree Celsius or above.  It is safe for the public to eat pork and pork products that are handled properly and cooked thoroughly."

He pointed out that the World Health Organisation, World Organisation for Animal Health, Food and Agriculture Organisation of the United Nations and World Trade Organisation had already stated that pork and pork products which were handled properly and thoroughly cooked were not a source of human swine influenza infection.

Despite the constant bland assurances over the safety of consuming pork, the real concern is that pigs are excellent mixing vessels for influenza viruses, and that a new `reassorted’ virus could emerge and become a human health threat. 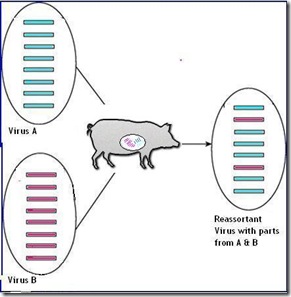 Of course, that’s a pretty rare event. After all, nothing like that has happened since . . . last spring.

The list of countries detecting the novel H1N1 virus among swine  continues to increase with Canada, the US, Japan, Ireland, Norway, Australia, Argentina, Iceland, and now China reporting infections.

Many countries either aren’t testing, or do so in a limited fashion, and so this list is likely incomplete.

A couple of weeks ago, David Brown of the Washington Post had an excellent report on the rising concerns over infections among swine herds.

Back where virus started, new scrutiny of pig farming

And you’ll find a few of my recent blogs on the subject below.

Posted by Michael Coston at 7:58 AM