The movie `Contagion', released 9 years ago, portrayed a fictional SARS-like virus (dubbed MEV-1) emerging from bats in China and spreading quickly around the globe as scientists at the CDC frantically worked to develop a vaccine. Unlike most summer blockbusters, this film endeavored to portray the science as accurately as possible (see my review here).


One area where the movie took considerable dramatic license was in portraying the development (and deployment) of a vaccine for this never-before-seen virus as happening over a matter of months, rather than years.

Just 4 months ago, a naturally occuring novel coronavirus sparking an epidemic was the fictional scenario used by Johns Hopkins Center For Health Security (JHCHS) - in concert with the World Economic Forum and the Bill & Melinda Gates Foundation - in a half-day table top pandemic exercise (#Event201) hosted in New York City.

In the JHCHS scenario, there was no possibility of a vaccine being available in the first year, and while there was a fictional antiviral drug that could help the sick, it wouldn't do much to slow the pandemic.

Now, with life imitating art, we've got a very real novel coronavirus - albeit of uncertain severity - spreading across China and slowly spilling out around the world. A vaccine is considered a long shot in anything less than 12 to 18 months, and right now, we don't have a known pharmacological intervention.


Despite all of this, we are not defenseless.

Last November, I wrote a multi-blog series (links below) on the WHO's revised 91-page Guidance document on the use of Non-Pharmaceutical Interventions during a severe influenza epidemic or pandemic.

WHO Guidance: Non-pharmaceutical Public Health Measures for Mitigating the Risk and Impact of Epidemic and Pandemic Influenza

The WHO NPI Guidance : Personal Protection

The WHO NPI Guidance : Social Distancing

The WHO NPI Guidance : Environmental Measures

While many countries have triggered these NPIs a lot sooner (and far more rigorously) than envisioned in this WHO document, when properly and consistently used, they can greatly reduce the spread and impact of a pandemic virus.


Nonpharmaceutical interventions (NPIs) are actions, apart from getting vaccinated and taking medicine, that people and communities can take to help slow the spread of illnesses like influenza (flu). NPIs are also known as community mitigation strategies.

Measures like social distancing, hand hygiene, staying home when sick, avoiding crowds, wearing a mask if you are sick, even the closure of schools or other public venues are all potential NPIs.

While some may scoff at their effectiveness, we have a real-world example during the worst flu pandemic in recorded history - the 1918 Spanish flu. 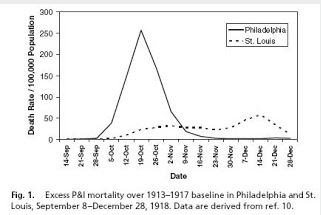 The chart above, taken from the PNAS journal article entitled Public Health Interventions and Pandemic Intensity During the 1918 Influenza Pandemic, illustrates what happened in two American cities during the 1918 pandemic. 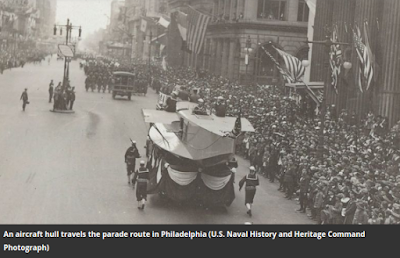 During the 3 weeks following Philadelphia's parade at least 6,081 deaths from influenza and 2,651 deaths from pneumonia were registered in Pennsylvania, most occurring in Philadelphia (CDC source).At its worst, the percentage of excess  people afflicted in the city of Philadelphia was 5 times greater than what St. Louis experienced.

The burden on hospitals, mortuaries, and practically all segments of the economy was certainly far greater.

In 2017's  Community Pandemic Mitigation's Primary Goal : Flattening The Curve, we look at the HHS/CDC's 2017 revised Community Mitigation Guidelines to Prevent Pandemic Influenza, which urges communities to be more like St. Louis in a pandemic. 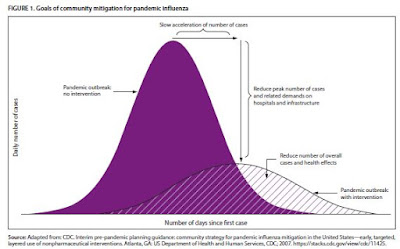 Specific goals for implementing NPIs early in a pandemic include slowing acceleration of the number of cases in a community, reducing the peak number of cases during the pandemic and related health care demands on hospitals and infrastructure, and decreasing overall cases and health effects ( Figure 1).

NPIs don't come without a cost, both economic and societal, but they can greatly limit the impact of a severe epidemic or pandemic, and save lives.

But in order to be successful, they must be rigorously observed.

If you haven't done so already, now would be a good time to familiarize yourself with the CDC's plans to deal with a severe epidemic.  You'll find some earlier blogs on the revised 2017 guidance at:


Additionally, the CDC has prepared pandemic guidance for a number of other venues:

While it is too soon to know which of these measures will be needed here for the novel coronavirus, much of what you can do now to prepare for a pandemic will hold you in good stead for any prolonged emergency or disaster.