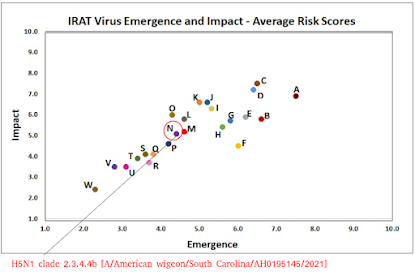 
The CDC monitors a (growing) number of novel influenza viruses with zoonotic potential on their  IRAT (Influenza Risk Assessment Tool)  website - that, using a variety of parameters - attempts to quantify their threat in two broad categories.
While IRAT can't predict which virus will become a pandemic strain (or when), it can help planners decide which viruses pose the greatest risks, so they can prioritize their efforts and investments.
In 2010 there were only 3 viruses on that list. By 2016 that number had grown to 11.  And in the 6 years since, it has more than doubled again (n=23).  A year ago, the CDC Added Zoonotic Avian A/H5N8 to their after 7 people in Russia were mildly infected with that virus.

In the past few days, with little fanfare, the CDC added the 23rd virus to this list; Avian A/H5N1 Clade 2.3.4.4b, following reports of the first human infection emerged from the UK earlier this year.  This report was finalized in March, before the 1st Human HPAI H5 Infection was reported in the United States.

The CDC ranks the Avian A/H1N1 virus's threat in the lower-middle of the pack, well below China's EA H1N1 swine-variant virus, or the far more virulent HPAI H5N6, or H7N9 viruses.  The CDC's summary follows:

Since January 2022, highly pathogenic avian influenza A(H5N1) virus clade 2.3.4.4b has been detected in the United States in numerous wild bird species, including aquatic birds such as ducks, and in commercial and backyard domestic poultry in numerous states.

In January 2022, one asymptomatic human infection with this virus, with known repeated exposure to infected ducks in England, was reported to the World Health Organization.

Phylogenetic analysis of A(H5N1) clade 2.3.4.4b viruses show high levels of genetic similarity to previously circulating A(H5Nx) clade 2.3.4.4b viruses, with little to no evidence of mammalian adaptation. The hemagglutinin genes of circulating wild bird and poultry viruses show a high level of genetic similarity, with some genetic variability noted among the neuraminidase gene, which is wild bird adapted.

Of the 23 novel viruses on the IRAT list, 8 involve avian HPAI H5Nx viruses, although most of those (like today's H5N1 virus) fall into the moderate risk category.  As to whether they are capable of sparking a pandemic in humans, the jury is still out.

And as we've discussed often over the past few years (see Are Influenza Pandemic Viruses Members Of An Exclusive Club?), the progression of human influenza pandemics over the past 130 years has been H2, H3, H1, H2, H3, H1, H1 . . . .

Simply put, novel H1, H2, and H3 flu viruses appear to have fewer barriers to overcome in order to jump to humans. That doesn't mean that an H5 or H7 virus can't adapt well enough to start a pandemic, only that we've never seen it happen (yet).
So while our avian A/H5N1 clade 2.3.4.4b virus is an unlikely candidate to spark a pandemic, we can't afford to ignore that possibility.
Posted by Michael Coston at 7:01 AM