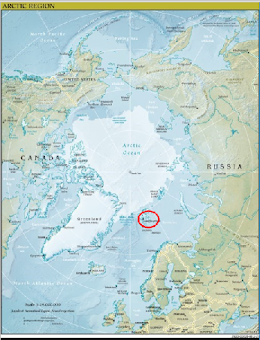 Location of Svalbard in the Arctic Ocean
#16,844

Although we know that many migratory bird species spend their summers roosting in high latitude regions of Alaska, Siberia, and the Arctic, we know relatively little about the transmission of HPAI (Highly Pathogenic Avian Influenza) viruses in these remote climes.

Until relatively recently, HPAI viruses appeared to be ill-suited for long term carriage by migratory birds (see PNAS: The Enigma Of Disappearing HPAI H5 In North American Migratory Waterfowl), but a reassortment event in 2016 seems to have given HPAI H5 clade 2.3.4.4 viruses that ability.

A 2016 study (see Sci Repts.: Southward Autumn Migration Of Waterfowl Facilitates Transmission Of HPAI H5N1), suggests that waterfowl pick up new HPAI viruses in the spring (likely from poultry or terrestrial birds) on their northbound trip to their summer breeding spots - where they spread and potentially evolve - and then redistribute them on their southbound journey the following fall.

This would help explain the recent, almost yearly, return of avian flu to Europe and it raises concerns that HPAI H5 might establish itself in North American birds as well.

Unknown, however, is how well HPAI viruses like H5N1 can survive, spread, and potentially evolve in these remote high latitude breeding spots.

Additionally, HPAI viruses that once all-but-disappeared during the summer months at lower latitudes are showing remarkable persistence, as evidenced by recent reports from Maine, and this report from Norway.

In recent weeks, an abnormally high number of sick and dead birds has been observed in several places along the Norwegian coast. In May and June, the Veterinary Institute detected highly pathogenic avian influenza (HPAI) of subtype H5N5 in sea eagles, ravens, crows and several gull species in Troms and Finnmark. In the North Sea and along the coast in Rogaland, a high number of dead ospreys have been observed, and HPAI of the subtype H5N1 has been detected in several of these. In addition, HPAI has been detected in wild birds in Oslo, Bergen and several places in Trøndelag and Møre og Romsdal.

For a recent opinion/hypothesis on this behavior change you may wish to read mBio's Has Epizootic Become Enzootic? Evidence for a Fundamental Change in the Infection Dynamics of Highly Pathogenic Avian Influenza in Europe, 2021.

All of which brings us to the following announcement from the Governor of Svalbard of what appears to be the first detection of HPAI in the Arctic. 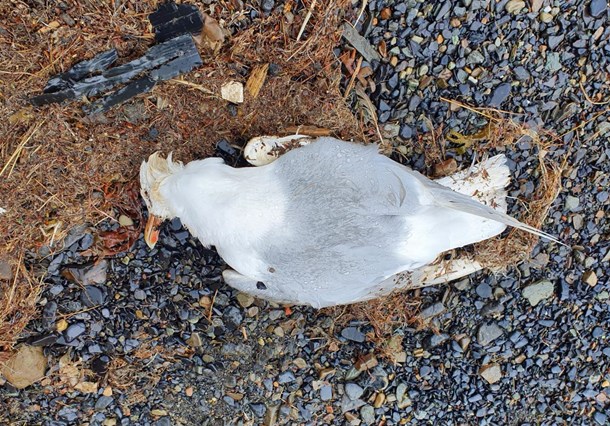 This dead polar gull was found at Gamlekaia in June. Photo: Anita Rude

The Veterinary Institute has detected contagious bird flu (highly pathogenic avian influenza virus - HPAI) in a polar gull that was found dead at the quay in Longyearbyen in June. Bird flu has never been detected in Svalbard before, and as far as the Veterinary Institute is aware, this is the first detection of the virus in the Arctic.
Published 23.06.2022

While HPAI H5Nx remains mostly a threat to wild birds and poultry, it continues to evolve in ways that increase its threat to avian species, and to mammals - and potentially humans - as well.  A few recent blogs on this trajectory include:

Where all of this leads is unknowable.  Fifteen years ago another HPAI H5 virus (Asian H5N1) was viewed as the world biggest influenza pandemic threat, but it gradually receded, giving way to other threats (e.g. H7N9).

The same thing could happen again.

But this time HPAI H5 is far more widespread, and it has acquired new traits that may give it advantages it didn't have the last time.   Time will tell.

But whether it comes from avian H5Nx, or Nipah, or MERS-Cov, or another novel virus, another pandemic is inevitable.  The only question is when.

And when that happens, we'd better be ready for it.

Posted by Michael Coston at 8:48 AM