Canada: First Detection Of H5N1 In A Black Bear 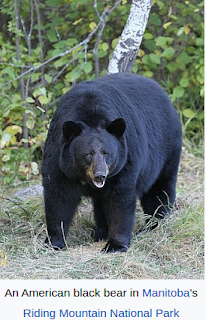 Adding to the list of `firsts' for HPAI H5N1 this summer (see today's First Known Infection of A Porpoise With Avian H5N1 and this report from June HPAI Detected In Arctic (Svalbard) For the First Time), Canadian Wildlife officials are reporting the first black bear known to be infected by HPAI H5N1.

And, as we've seen repeatedly over the past 2 years (see here, here, here, and here), this animal was also suffering from severe neurological manifestations.

Yesterday, Healthy Wildlife - the blog of the Canadian Wildlife Health Cooperative - published the following report.  I'll have a bit more after the break:


An adult female black bear exhibiting unusual behaviour was reported by visitors in June at Forillon National Park in the Gaspésie region, Quebec. This bear was exhibiting strange behaviour early in the day on June 14. It wandered between vehicles, went down to the water in a fishing harbour, began to swim around in circles, came out and hit a wall. Later that day, Parks Canada staff found the animal lying on its side in a ditch breathing shallowly and unresponsive to sound stimuli. Convulsions and spasms were also observed. Due to its condition, the animal was anesthetized by Parks Canada employees and then euthanized for humanitarian reasons. Various organs sampled by park employees were sent to the RCSF-Quebec for analysis.

Microscopic examination of the tissues revealed the presence of inflammatory lesions in the animal’s brain (meningoencephalitis). These lesions were characterized by a significant perivascular accumulation of lymphoplasmacytic cells. This same type of cell also infiltrated the meninges. Neuronal necrosis was also present. Molecular analyzes carried out by the MAPAQ laboratory revealed the presence of a highly pathogenic H5N1 avian influenza virus (H5N1 AIV) in the brain. This result was confirmed by the CFIA laboratory.
The results of these examinations therefore indicate that the neurological signs observed in this bear were due to inflammation of the brain caused by an infection with the H5N1 AIV virus. This virus, which appeared in North America last winter, has so far been associated with significant mortalities in several species of wild birds. Three groups of birds have been particularly affected by this virus so far: waterfowl (geese and ducks), scavenger birds (gulls, vultures, corvids and bald eagles) and colonial seabirds (common eiders and gannets).
Although much less common than infections in birds, fatal infections have also been reported in a few species of mammals, including red foxes, raccoons, striped skunks and harbour seals. The case described here is, to our knowledge, the first case of fatal infection by an H5N1 AIV in a bear. We can hypothesize that this animal became infected by consuming the carcasses of seabirds on the shores of the park. In fact, H5N1 AIV infections have been documented during the months of May and June in the region in several seabirds, including northern gannet, razorbill, surf scoter and common guillemot. This mode of infection (by ingestion) is the proposed mode of contamination for all mammalian species except seals.

The documentation of these cases of infection in mammalian species can help us better understand which genetic modifications can potentially promote infections in mammals, including humans.

Although the risk of transmission of this avian influenza virus to humans and domestic animals seems low, it is recommended not to approach, and especially not to touch a sick or dead animal. We will also prevent contact between our pets and dead wild birds or mammals. Additionally, although the risks are low, it is recommended that meat from game birds or mammalian species, which can potentially consume infected birds, be thoroughly cooked.

Recommendations related to hunting and avian flu can be consulted on the following web page: https://www.canada.ca/en/public-health/services/flu-influenza/fact-sheet-guidance-on-precautions-handling-wild-birds.html

Unlike the epizootic of 2015 - which subsided once summer arrived - HPAI H5 has remained active in both North America and in Europe deep into the summer, and we can expect a new batch of migratory birds will arrive from their summer roosting spots over the next couple of months.

Notably, the virus has broadened its avian host range (see DEFRA: The Unprecedented `Order Shift' In Wild Bird H5N1 Positives In Europe & The UK), as it has continued to expand geographically.

Human infections, have thankfully been very few and mild. Nevertheless, just over 3 months ago the CDC Added Zoonotic Avian A/H5N1 Clade 2.3.4.4b To IRAT List. Although its threat to human health remains low, HPAI H5 appears to be slowly adapting to mammalian hosts, and so that happy state of affairs may not last forever.
A recent study in Transboundary and Emerging Diseases, finds similar adaptations in an H5N8 virus in China.

While there may be some - as yet, unidentified - species barrier that prevents avian H5 viruses from sparking a human pandemic (see Are Influenza Pandemic Viruses Members Of An Exclusive Club?), 20 years ago Coronaviruses regarded as mild `cold-like' viruses with no pandemic potential.
Which is why we never like to say `never', when it comes to viruses.
Posted by Michael Coston at 8:12 AM