CDC On Preventive Measures to Protect Against Bird Flu Viruses 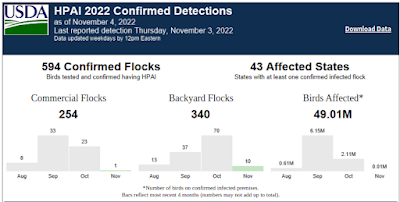 #17,106
Compared to its deadlier ancestral strains which spread across Asia, parts of Europe, and the Middle East in the first decade of the 21st century, the HPAI H5N1 virus currently spreading across Europe and North America today is viewed as far less dangerous.

At least to humans.

So far, it has only been documented to have infected a handful of people, causing mild or asymptomatic infection. But it has caused serious (even fatal) illness in other mammals, making it worthy of our concern (see Ain't No Cure For the Summer Bird Flu)..

And additional evolutionary changes are likely.

While the risk to the general public is low, it is not zero. And in the past few months we've seen two instances in China where avian flu was transmitted (either, to or from) a family pet to members of the household (see HERE and HERE).

In 2016, we saw an outbreak of avian H7N2 sweep through hundreds of cats across several NYC animal shelters, eventually infecting several employees.

Companion animals are of particular concern because they are well placed to bridge the gap between contact with wildlife and close contact with humans (see CDC: A Reminder About Pets and Avian Flu).
On Thursday (Nov 3rd) the CDC published advice for the general public in avoiding contact with sick birds (see below).

November 3, 2022—As bird flu outbreaks in wild birds and poultry continue across the U.S., the country approaches a record number of birds affected compared to previous bird flu outbreaks. Since early 2022, more than 49 million birds in 46 states have either died as a result of bird flu virus infection or have been culled (killed) due to exposure to infected birds. This number is nearing the 50.5 million birds in 21 states that were affected by the largest bird flu outbreak that occurred in 2015. Even so, the number of states affected in 2022 is already more than double the number of states that were affected in 2015.

Although the overall risk to the general public from the current bird flu outbreaks remains low, it is important that people take preventive measures around infected or potentially infected birds/poultry to prevent the spread of bird flu viruses to themselves or to other birds/poultry and other animals, including pets. This applies not just to workplace or wildlife settings but potentially to household settings where people have backyard flocks or pet birds with potential exposures to wild or domestic infected birds.

To prevent infection, people should avoid unprotected contact with wild or domestic birds and poultry that look sick or have died. Bird flu infections in people happen most often after close, prolonged, and unprotected (no gloves or other protective wear) contact with infected birds or surfaces contaminated with bird flu viruses.

If contact cannot be avoided, people should minimize contact with wild birds or sick or dead poultry by taking the following precautions:

CDC has more information for specific groups who may come in contact with potentially infected birds/poultry.

For backyard poultry or bird owners, take measures to keep your bird(s) from becoming infected with bird flu virus, which can be deadly. Infected birds shed avian influenza A viruses in their saliva, mucous and feces. Susceptible birds become infected when they have contact with the virus as it is shed by infected birds. This can happen through direct contact with infected waterfowl or other infected poultry, or through contact with surfaces that have been contaminated with virus. Avian influenza A viruses are very contagious among birds, and some of these viruses can sicken and even kill certain domesticated bird species, including chickens, ducks and turkeys.

CDC has been monitoring for illness among people exposed to bird flu virus-infected birds since these outbreaks were first detected in U.S. wild birds and poultry in late 2021. To date, bird flu viruses have been found in U.S. commercial and backyard poultry in 44 states and in wild birds in 46 states since early 2022. CDC has tracked the health of more than 5,190 people with exposures to bird flu virus-infected birds with one case reported. Information on the person in the U.S. who tested positive for bird flu earlier this year can be found in the associated spotlight and press release.

CDC continues to monitor the current situation and risk to the general public. Sporadic human infections with bird flu viruses in the U.S. resulting from close contact with infected birds/poultry would not be surprising given past human infections that have occurred in other countries after exposure to infected birds. This would not significantly change CDC’s risk assessment.

However, if person-to-person spread with this virus were to occur, that would raise the public health threat. Note that sustained person-to-person spread is needed for a pandemic to occur. It is important for people to continue taking precautions around infected and potentially infected birds/poultry to help reduce the risk of bird flu virus infections in people.

While HPAI H5Nx remains primarily a threat to wild birds and poultry can't discount the possibility that it could pose a greater threat to humans in the future (see Spain: Avian H5N1 Spillover Into Farmed Mink).
Meanwhile, we need to learn to live safely with this virus, since it doesn't appear to be leaving anytime soon.
Posted by Michael Coston at 8:00 AM