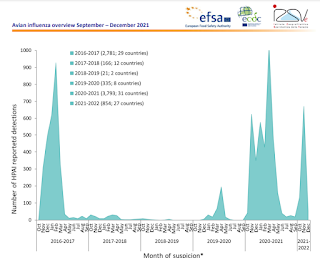 Europe in 3rd Avian Epizootic In Past 5 Years

Up until the fall of 2016, the HPAI H5N8 virus that emerged in early 2014 in South Korea, and made its way to North America a year later, was primarily a threat only to poultry.

Most wild birds seemed to carry it without ill effects, and it was viewed as having very little zoonotic potential.

As HPAI H5 spread across Europe over the fall of 2016, we were also starting to see spin offs of new subtypes (see HPAI H5N5 Detected In German Poultry Operation), along with reports of Unusual Mortality Among Wild Birds.

Since then, we've seen reassortments of this original H5N8 virus return as H5N6, and this year, H5N1.  All belong to a European clade 2.3.4.4b - which is a different lineage than the more dangerous Asian HPAI H5 subtypes. But over time we have seen evidence that this European clade is slowly acquiring mammalian adaptations.
While once just fodder for speculation (see 2017's J. Virulence Editorial: HPAI H5N8 - Should We Be Worried?), over the past year we've seen confirmation on at least 3 separate occasions (Russia, Nigeria & UK) that this H5Nx virus can jump species and infect humans, prompting the CDC to Add Zoonotic Avian A/H5N8 To Their IRAT List.
We've also seen a number of other reports indicating that other land and aquatic mammals are susceptible to infection from this H5 clade 2.3.4.4b virus.

All of this led the ECDC/EFSA to Raise The Zoonotic Risk Potential Of Avian H5Nx in late December, citing both the Russian and Nigerian human infections, and the recent spate of detections among mammalian species.

This risk to the general public of human transmission due to avian influenza A(H5N8) is therefore assessed as low and to occupationally exposed people low to moderate. Avian influenza virus transmission to humans is a rare event and the risk is considered very low for viruses adapted to avian species. However, the detection of viruses carrying markers for mammal adaptation, and correlated with increased replication and virulence in mammals, is of concern.

The additional reports of transmission events to mammals, e.g. seals and foxes in several EU countries as well as seroepidemiological evidence of transmission to wild boar and domestic pigs, could indicate evolutionary processes including mammal adaptation with the possibility to acquire the ability to transmit to humans.

All of which brings us to a new report from  Wageningen Bioveterinary Research (WBVR) in the Netherlands, that describes the finding of another wild fox infected with the H5N1 virus, that was exhibiting neurological symptoms.

Wageningen Bioveterinary Research (WBVR) has diagnosed bird flu in a fox from Dorst in the province of Brabant. The virus has been classified as highly pathogenic bird flu type H5N1. The fox was found in early December and showed neurological signs such as walking in circles, falling over and was probably blind. The fox was taken in by an animal shelter, and was euthanized there because of the serious symptoms.

WBVR subsequently conducted further research into the genetic makeup of the fox virus. The virus is very similar to the viruses found in infected wild birds in the Netherlands. It is therefore plausible that the fox became infected by eating wild birds infected with bird flu. The virus found in the fox is not related to the zoonotic highly pathogenic avian influenza (HPAI) H5N1 strains that have also infected humans in Asia.

Infection of foxes with H5N1 virus was previously demonstrated in two fox pups found in Groningen in May 2021. Some H5N1-infected foxes, seals and an otter have also been found elsewhere in Europe. The genetic analysis of the fox virus has also shown that this virus contains a marker important for virus infection of mammals. Similar genetic markers were also found in some viruses from infected mammals in other countries. However, more genetic adjustments are needed before a bird flu virus can spread between humans.

Risk for people is small

The chance that people will become infected with bird flu is very small, and the risk to public health is still estimated by RIVM as low. It is important to be aware of foxes and other mammals with neurological signs that may be caused by bird flu. It is recommended to avoid contact with sick and dead birds or other animals. Dead birds and other wild animals can be reported to the NVWA or to the Dutch Wildlife Health Center (DWHC).

But these Asian clade 2.3.2.1c-like H5N1 viruses are genetically different from the European H5Nx clade 2.3.4.4b viruses, making these recent reports of neurological presentations unexpected, and worth our attention.

While clade 2.3.4.4b H5Nx viruses currently pose a very low threat to humans, they appear to be slowly getting their act together, prompting a number of cautionary reports over the past 12 months, including:

So we treat these reports seriously, since we can't know when - or in what direction - the next reassortment event or series of mutations will take this virus subtype.